I remember when I first learned that my paternal grandmother had been married before. I think it was in July 1969, so I would have been 14. We were visiting my grandparents at their home near Massena, NY, going through family pictures. I came across this school souvenir, which included on the cover a photograph of the teacher, James D. Calhoun. I asked Grandma who this guy was and she said, ‘that’s my first husband.’ The news startled me. I didn’t known about grandma’s previous marriage. While she was alive, I didn’t pursue this, though when I first asked her about him she said he was a wonderful man. She still missed him more than 50 years after his death.

I learned much more about grandma’s first husband after her death in March 1980. We found a tin box that held letters Anna and James exchanged during their brief marriage. The letters were turned over to me (and will eventually go to the Delaware County Historical Association).

One hundred years ago today, on November 14, 1917, Anna Bell Barnhart married James Calhoun. The marriage would last eleven months, ending with the death of James on a battlefield in France on October 13, 1918 (see the entry in this blog for November 11, 2010 for more about his death). Out of the 11 months of their marriage. James and Anna Bell would spend about 11 days together. Anna Bell was widowed over four years when in May 1923, she married my grandfather Benson LaFever in Bovina. My grandparents lived in Bovina until the 1950s, then moved to Northern New York, where they lived until her passing in 1980 and his in 1982.

Over the course of the next year, I will be sharing selected transcripts of the letters my grandmother and her first husband exchanged while he was in the army. The bulk of the letters are ones written by James during his service, but some of grandma’s responses survive, three from December 1917 and a group from March 1918. The reason more of her letters did not survive was because, as James frankly admitted in a letter to her, he destroyed most of her letters to protect their privacy. The letters have their personal elements but also give an idea of what was happening in Bovina during the war.

James Calhoun was born in Andes, New York, on December 3, 1889, the son of Daniel Calhoun and Cornelia McNair.  He was one of seven children born to Daniel and Cornelia. He taught for a year in the Biggar Hollow school (1909-1910) before moving to Iowa. About a year later, he went to Colorado and then came back to Iowa around 1913 before coming back to Andes for good in 1914. He became the area’s milk tester. It likely was through this job that he met Anna Bell Barnhart. Anna Bell was born November 7, 1893, the daughter of Jeremy Barnhart and Kate Miller.  She had an older brother, Ralph and was joined in 1897 by a sister Edith and in 1901 by a brother, Wilford.  She grew up on the family farm on Pink Street, going to the local school through the 8th grade.

There were only three letters from James and none from Anna in her papers dated before their November 14 wedding.  The earliest letter from James is dated September 1, 1917, Bovina Center.  It probably was addressed to Anna, but it’s addressed ‘Dear friend.”  The letter continues:

I received your invitation to the picnic when I came over from home yesterday (Friday).  I was disappointed when I did not get word in time so I could attend.  It was very kind of you to invite me and I would certainly enjoyed going.
I have received notice from the local army board at Delhi to be prepared to report for duty on 24 hours notice.
Very sincerely, James

The fact that James was facing the draft would be a factor during their courtship.  The next letter from James, dated September 29, 1917 from Delhi discusses this further:

The Drafted men chosen to go to camp Dix at this time are all present except one. Another young man, who is very anxious to go at this time, has been chosen to go in my place so I shall not go until the remainder of the boys leave.

The last letter from James to Anna before their marriage in my grandmother’s files is brief, written in Bovina on November 7, 1917:

Dear Anna;
Father died this morning. I am on my way home. Lay your plans as you previously intended. I cannot tell when I shall see you but will sometime the last of the week.

James’ father, Daniel, died unexpectedly.  The local newspaper reported that Daniel had not been sleeping well, so “he got up to sit in his chair and a little while later his wife found he had fallen from the chair and lay dead.”  The same newspaper in the Bovina Center column reported that a “large number of Bovina folks motored to Andes for the funeral of Daniel Calhoun.” The funeral was held on Saturday, November 10. Anna and James’ wedding took place the following Wednesday. [Anna Bell's father, Jeremy, had died on November 6, 1916, a year and a day before the death of Daniel Calhoun.] 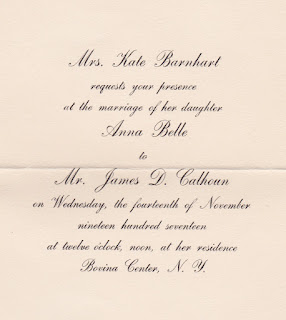 One of the earliest letter of congratulations concerning Anna’s and James’ impending wedding in my grandmother’s files was written by her Aunt Maria Barnhart Albee from Unadilla, her late father’s sister. The letter is one of my favorites. She references the fact that at age 24, grandma was considered to be a bit ‘old.' The letter also notes the recent passage of women’s suffrage in New York State.

Dear Annabell:
Well you sly thing you - well - well and so you have decided not to be an “old maid” after all, and you can vote too.
I am not going to write very much because just to be real mean I am or we are going to come if the roads stay good.  We have never gotten any chains yet…We are going to hope for a dandy day - we have thought of coming up there ever since we got the car but the rain and fall work have just spoiled things for us.  I wanted to come to return that loaf of bread, but I shall not bring it this time.
I am enclosing a little something for you from Uncle Charlie and I and Grandma.  Charlie didn’t spell your name like you spell it but I don’t believe you will have any trouble getting it if you endorse it the same.
I thought I would send it so if the weather was bad you would have it any way.  We probably won’t come unless the day is good also the roads.
Wishing you both a long happy life, I am with love,
Aunt Maria

A note on the spelling of my grandmother’s first name. It was misspelled constantly during her life - it was Anna Bell (no second 'e'). It was wrong in the news reports of her wedding and even on her own wedding invitation and, later, on the tombstone erected for her and her first husband in the 1920s. You may notice as these entries are presented that James always called her Anna, but everyone else called her Anna Bell. That’s how I always heard her called, including by my grandfather. In letters to his family, James usually refers to his wife as Anna, though in one instance, he did say Anna Bell. She signed her letters to him as Anna and to his family as Anna B. Calhoun. (James had a sister named Anna, adding somewhat to the confusion in reviewing these letters.)

Anna Bell Barnhart was married to James Daniel Calhoun on Wednesday, November 14 at noon at the home of Anna Bell’s mother, Kate Barnhart, on Pink Street (the farm now owned by the Glavins).  As reported in the local newspaper, the “ceremony was performed handsomely by the Rev. Forbes of Andes, assisted by the Rev. Thos. E. Graham of Bovina.” Anna’s sister Edith was her bridesmaid and George Storie was the best man for his friend James. “The bridal couple left about 3:30 in the handsome Cadillac of Andrew Doig, to spend a few days visiting some of our larger cities.” 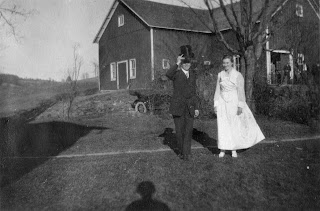 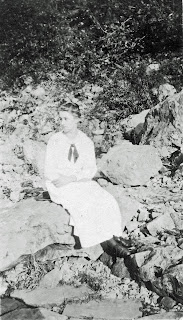 The newspaper noted that James and Anna Bell were to visit some cities, but from my grandmother's photo album, I can see that they also went to that Mecca for honeymooners in that era, Niagara Falls. Here are three photos from that trip. 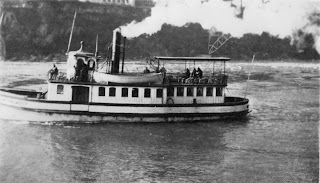 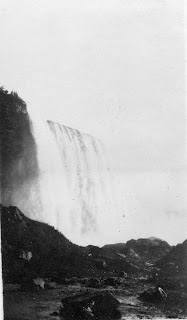 Nine days after his wedding, on Friday, November 23, 1917, James left Delhi with a group of thirty-two men.  The local paper reported that “all these men will be presented with a box lunch by Delhi people and with a comfort set by the Red Cross, which includes sweater, wristlets, etc."

James’s first letter to Anna after heading into service was written the evening of his departure on a 3 x 5 card:

Dear Anna,
We have just passed through Allentown.  It is 7:00 oclock and suppertime.  Most of the fellows seem happy.  Some of them seem like good fellows and some of them swear like real troopers.  The train people served dinner to all the boys and are now serving supper.
Frank Munson and Leslie Cameron are the only fellows I have ever met before.
I felt very sorry for Frank but he is making the most of it.  Hazel will feel badly.  I am thinking very tenderly of you.
With love James

The story of my grandma's first husband will continue next month in this blog.
Posted by Bovina Historian at 8:00 AM