Bovina has had a library in one form or another since at least 1836, when the Bovina Subscription Library was incorporated. Application was made to the New York State Legislature in 1835 to establish the library. It had 44 subscribers and 227 volumes when it was incorporated in April 1936, with a treasury of $20.12. James Douglas was chairman of the library, with Samuel Gordon serving as the “librarian clerk” and Thomas Eliott as treasurer. The trustees included Adam Scott, William Murray, John Miller, John Roe, Thomas McFarland, Jr, James Archibald. How long the library existed I have yet to determine. (Note: as far as I can tell, Samuel Gordon is no relation to Thomas Gordon, who was Bovina's Town Clerk in the early 20th century.)

The first public library in Bovina was created in 1879 when the “Young People’s Christian Association” of the Bovina United Presbyterian Church organized a small library in the church basement, with volumes presented by the church pastor. Additional items were donated by E.T. Gerry and Ferris Jacobs. When the Association folded, the books reverted to the Bovina church. In 1896, Mr. Gerry donated $100 to William Coulter to be used for library purposes. An additional $50 was donated by the noted industrialist Henry Clay Frick of Pittsburg. Frick, with Andrew Carnegie, created what became U.S. Steel. These donations allowed the church trustees to re-establish the library. 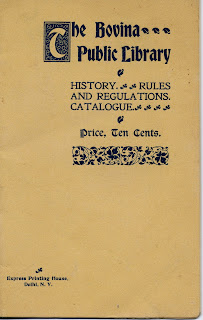 Any person “living in Bovina or vicinity” was allowed to take out books with an annual payment of 25 cents. Books were allowed out for fourteen days, with a fine of 2 cents a day for each additional day the book was out. During this time, the Gerry family made several generous donations of books and magazines. In 1905, a state library inspector paid a visit to the Bovina library and reported that “the Bovina library was one of the best selected libraries of its size in the State.” At this time, though called the Bovina Public Library, it still was owned by the Trustees of the Bovina UP Church.

Around 1910, J.W. Coulter offered the wing of his building, which had once been a tin shop and hardware store, to be used for the library. When he died in early 1917, he bequeathed the entire building, along with $2,700, to establish a public library. That summer the Bovina Library Association was formed, with Thomas Gordon, Andrew T. Doig and Walter G. Coulter as trustees. On December 27, 1917, the Bovina Public Library was chartered by the New York State Board of Regents.

Over the next three years, the renovations funded by the J.W. Coulter bequest took place. The building’s extension was removed and the main body of the structure was completely redone to serve as a library. During the renovations, the library books were moved to the firehall next door.

The library stayed in this building for just over 50 years. One of the first librarians after the library received its charter was Ida McNair McCune. Other librarians over this period included Aggie Draffen, Celia Coulter and Therese Aitken, In 1956, Dot Russell began her long tenure as the Bovina librarian, working into the 1990s. The library's collection continued to grow through donations and purchases. The Gerry family made further donations to the library.

In 1950, the library reported the following circulation numbers: “Adult fiction, 529; adult nonfiction, 184; adult periodicals, 847; children’s books, 1,082; children’s periodicals, 274; teen-age fiction, 260; teen-age non-fiction, 125; other materials, 101; grand total, 3402.”
The library’s next big change came in 1970, when it was moved into its current home in the former District four school house on Maple Avenue, built in 1893. Generous funding from the O’Connor Foundation allowed for major renovations in 1973. An open house and re-dedication of the newly remodeled library took place in June 1974. 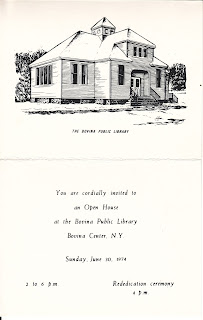 The Bovina Public Library continues to receive generous donations. In 2000, the library received a major bequest from the Charles Lichtenberg estate, given in memory of his late wife, Jane Archibald Lichtenberg, a Bovina native.

The bequest made by J.W. Coulter in 1917 was followed more recently by his first cousin twice removed, Celia Coulter, who passed away in 2015. Celia's stint as Bovina's librarian likely is what led her to attend SUNY Albany’s library school, where she received her master’s degree in 1955.

As the library begins its second century as a New York State chartered institution, it has received $140,776 from the State of New York's public library construction fund for a much needed renovation to its foundation and basement.

On July 15, the library will have a centennial celebration at the library, starting with the dedication of a historic marker at 5, followed by a dessert contest and a picnic. Come and join the celebration. 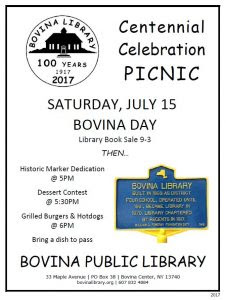