Wedding from 100 Years Ago - Cecil and Isabell Russell

100 years ago, on September 20, 1916, Cecil and Isabell Russell were married. Best known as the owners and proprietors of Russell's Store in Bovina, their marriage would last over 65 years, ending at Cecil's death in January 1982 (Isabell died 3 years later in November 1985). Here's the newsclipping from the Delaware Express (Delhi):

Fifty years later, to the day, Cecil and Isabell would celebrate their Golden Wedding anniversary at a reception held in the Bovina U.P. Church. Here's the news clipping from the Delaware Republican-Express (Delhi). 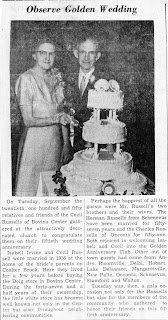 In 1976 they observed their 60th wedding anniversary. By then, Cecil was experiencing health problems, so no party was planned. They were photographed by a Daily Star (Oneonta) reporter for this article below.