This Day in Bovina For September 2016

156 years ago today, on September 1, 1860, Will Lull submitted this ad for boots, which ran in the Bloomville Mirror. "The subscriber has on hand and for sale 130 pairs of boots, manufactured of the best material at his shop in Brushland. The public are invited to call and examine the Stock before purchasing elsewhere. Hides and County Produce taken in exchange."

115 years ago today, on September 2, 1901, as later reported in the Delaware Gazette, "The Bovina and Elk Creek teams played a good game of baseball on the Academy grounds…notwithstanding the rather unfavorable weather. At the close of the ninth inning the score stood at a tie. Consequently the tenth inning had to be played to settle the contest. It was closely contested, but the Bovina boys won the score, standing 10 to 9."

165 years ago today, James Renwick posted an ad dated September 3, 1851 to sell his farm: "The subscriber offers for sale the Farm on which he now resides, in the town of Bovina, containing about 180 acres. There are two good dwelling houses and three good barns and other out buildings. It is mostly fence with stone wall. Also, a large orchard of bearing apple trees - well watered and well calculated for a grain or dairy farm. Terms easy. For further particulars enquire of the subscriber. He would be willing to take a small farm in part payment." This farm was on what is now Pink Street, possibly around the area of Suits-Us farm. He had leased it from the Livingston family since about 1822.

115 years ago today, the September 4, 1901 Delaware Gazette reported that "G.W. Fuller, of Bovina, was brought before Police Justice Hewitt, charged with public intoxication. He pled guilty and was fined $5. The fine was paid."

113 years ago today, the September 5, 1903 Delaware Republican carried a small article entitled "The Highway Money System." The report stated that "The town of Bovina will vote this fall on the proposition to change to the money system of paying the road tax. In Bovina, it is said, the State would pay $450, which would do very much towards road improvement in that town." The previous system involved every property owner being assessed so many days of work on the roads. The owner either did the work or paid someone to do it.

Eighty-one years ago today, the September 6, 1935 Catskill Mountain News reported in its Bovina column that "Bovina has several new students starting in this year at Delaware Academy."

115 years ago today, the September 7, 1901 Delaware Republican had the following item of news ('borrowed' from the Andes Recorder): "Needle in Her Foot - For some time Mrs. Joshua Hobbie, who resides in the upper part of Bovina, has been suffering severely with swollen foot, it was thought she would have to go to the hospital and undergo an operation. Last week she was rubbing the afflicted member when she felt something sharp in the foot and called to others of the family and an examination showed that the point of a needle protruded and when pulled out by Mr. Hobbie it was found that with the exception of being broken at the eye the needle was intact. How the needle got there is a mystery, as Mrs. Hobbie has no recollection of ever running a needle into herself. She still has a very bad foot." This likely is Matilda Pangburn Hobbie. Born in 1862, she survived the needle and died in 1927.

130 years ago today, the September 8, 1886 Delaware Gazette reported that "The beautiful village in the town of Bovina, previously known as Brushland, will hereafter be known as Bovina Centre. Brushland was a misnomer for the place, for it was never a land of brush but always a land of cattle. We understand that it was through the personal efforts of Rev. Dr. Lee that the name has been changed from Brushland to Bovina Centre by the Postmaster General. We congratulate the inhabitants of our neighboring village on this change of names, for it certainly is much more appropriate." Brushland got its name from Alexander Brush, the first settler in what is now Bovina Center. Bovina Center was known as Brushland from 1849 to this reported change in 1886.

148 years ago today, on September 9, 1868, Margaret Ellen Strangeway was born in New Jersey, the daughter of the Reverend William Strangeway and Margaret T. Dunn. Her parents were from Delaware County but were living in New Jersey at the time of Margaret's birth. She was married to Oscar A. Felton in 1892 and they lived for some time in Bovina near Lake Delaware. She had two daughters, both of whom predeceased her. She died in 1943 in Walton and was buried in Bovina. Her husband survived until 1950.

103 years ago today, on September 10, 1913, as later reported in the Delaware Gazette, "…a Downsville man named W.C. O'Brien, who was employed in the blacksmith shop of Gideon Miller, Bovina Center, suddenly fell unconscious while at work in the shop. He did not revive and died about two hours later."

153 years ago today, on September 11, 1863, William McCune, trustee for Bovina School District Number 2 (Pink Street) signed this order to pay Elisabeth Colgan $18.12 for teaching in the school for a four month period. 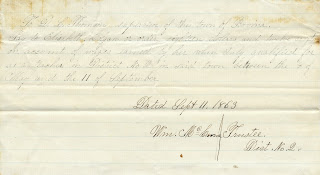 116 years ago today, the September 12, 1900 Delaware Gazette reported that "Commodore Elbridge T. Gerry has ordered the manager of his estate at Lake Delaware to have the public highway between Bloomville and Bovina Center repaired, he himself paying for the same, preparatory to his coming to his country seat at that place, which will be in the near future. It is his purpose to come over the Ulster & Delaware railroad to Bloomville and from there by carriage to Lake Delaware."

126 years ago today, the Bovina column of the September 13, 1890 Delaware Republican reported that "Rev. Mason W. Pressly is expecting a windmill, and intends to have running water in his house." 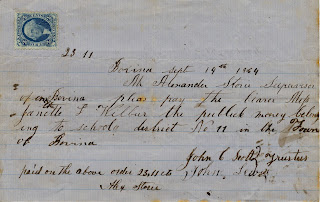 135 years ago today, on the afternoon of September 15, 1881, Mrs. Orr Sloan died at the home of her son-in-law, James Aitkin in what is now Bovina Center. She was born Sarah Collins in Belfast, Ireland.

Sixty three years ago today, on September 16, 1953, as later reported in the Catskill Mountain News, a school fair was held at the Bovina Center school. Here's the article which appeared on the front page of the paper. 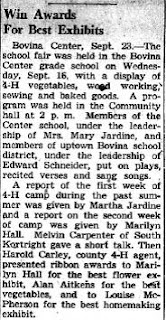 182 years ago today, the September 17, 1834 Delaware Gazette had the following item: "Prolific - Mr. Robert Mitchell of Bovina, in this county, has raised, the present season, three calves from one cow. It is seldom that an instance of this kind occurs, particularly where the calves all live and do well, as in this case."

113 years ago today, on September 18, 1903, little Mozelle Thompson, the five year old daughter of William Thomson, "while playing at school last Friday afternoon, fell and broke her arm just above the elbow." Mozelle survived her ordeal and died in 1989 at the age of 92.

135 years ago today, Alex Storie recorded the following in his diary for September 19, 1881: "Dry and warm today. Boys finished cutting the planted corn in the AM and cut some sowed corn in PM. 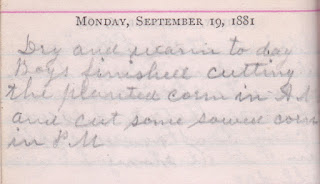 113 years ago today, on September 20, 1903, as later reported in the Delaware Gazette, "Stephen Russell died at his residence…in the 82d year of his age. He had always lived in Bovina, being born in that town January, 1822. Mr. Russell was a very substantial farmer and one of the excellent citizens of the locality. His wife died a few years ago, but he is survived by a family of several children."

106 years ago today, the September 21, 1910 Delaware Gazette reported on "An Unhappy Matter" concerning a former Bovina resident. "Charles Oliver, with a very large family, recently moved from Bovina into a house on the rear of the Pitcher block [not sure, but likely this was in Delhi]. Their habits were soon found not very creditable. Sunday evening about a dozen chickens, two ducks and a saw were stolen from John Strangeways. Monday evening Sheriff Austin and Police Justice Hewitt went to the Oliver house. When they rapped at the door the light was put out. The sheriff demanded entrance and they were admitted. They found the saw, and the chickens were on the table. Oliver admitted that he stole the saw and five chickens but denied as to the rest. He is notorious for not being willing to work. In Bovina a notice was tacked on the door to move out or go to work, signed White Caps. It is said they are preparing to go to Walton. There are seven or eight children living, and it is said a dozen or fifteen have been born."

Sixty-three years ago today, on September 22, 1953, the Democrats and Republicans in Bovina held their primaries and selected these slates for town office. 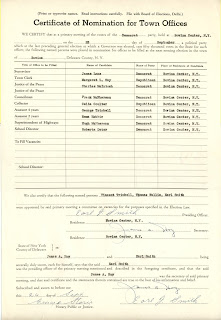 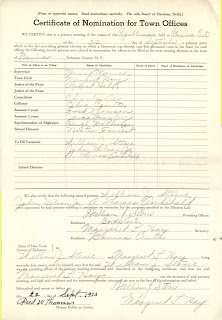 Fifty one years ago today, the Bovina column of the September 23, 1965 Delaware Republican Express reported that "Mr. and Mrs. Jack Hilson and Christine attended the World's Fair the past week-end." The same column also reported that "Mrs. Agnes Burns visited a few days at the home of Dr. and Mrs. Fred Phillips in Latham (Norma Phillips is Agnes' daughter).

Fifty-four years ago today, on September 24, 1962, Rema Hobbie died on the family farm on Cape Horn Road in Bovina. His obituary was published a few days later in the Catskill Mountain News.

108 years ago today, on September 26, 1908, as later reported in the Delaware Gazette, "there arrived in Delhi….from Montana, an antelope 3 months old. It appeared to have been well taken care of on its long trip, and was quite a curiosity to a good many of our citizens, especially the children. It was sent to the father of Mr. Ed. Russell, in Bovina, on the Andes stage Monday morning."

159 years ago today, late the night before or early on September 27, 1857, as later reported in the Delaware Gazette, "the proceeds of a year's produce of the farm of John Bramley, of Bovina, was burned to the ground. It is believed to have been the work of an incendiary, but nothing has occurred to fix the crime upon any individual." Though not positive, I think this farm was on Pink Street, about a mile or so outside Bovina Center.

Fifty-nine years ago today, on September 28, 1957, Rev. David Hamilton Murray died in Hancock. The last surviving child of Bovina natives Henry Murray and Elizabeth Coulter, he was born in Andes in 1872. He married Jessie M. Cheney. He is buried near his parents in the Bovina Cemetery.

208 years ago today, on September 29, 1808, James Coulter was born, the last child of early Bovina settlers Francis and Nancy (Glendenning) Coulter. He also was the last surviving child of Francis and Nancy, dying in 1898 at the age of 90. He married Nancy D. Thompson in 1832. She predeceased him in 1891. They would have 13 children, six of whom survived their father. James and Nancy lost a son in the Civil War (Solomon) and another to tuberculosis (Andrew).

Sixty-seven years ago today, the September 30, 1949 Catskill Mountain News reported that in Bovina, "Rains which have benefited pastures, meadows and lawns have not been sufficient to raise water where springs and wells have gone dry."
Posted by Bovina Historian at 8:00 AM