155 years ago this month, a building committee of the Bovina Reformed Presbyeterian Church posted this ad looking for proposals for the construction of a new church building. The congregation had been using their stone church in the Mountain Brook area of Bovina since it's construction in the 1820s, but decided they needed a new structure. They posted the following notice in the Delaware Gazette (and maybe in a couple of other area newspapers) 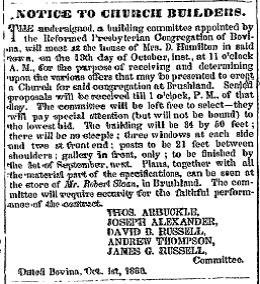 Here's the text of this notice:

The undersigned, a building committee appointed by the Reformed Presbyterian Congregation of Bovina, will meet at the house of Mrs. D. Hamilton in said town, on the 13th day of October, inst., at 11 o’clock A.M. for the purpose of receiving and determining upon the various offers that may be presented to erect a Church for said congregation at Brushland. Sealed proposals will be received till 1 o’clock, P.M., of that day. The committee will be left free to select – they will pay special attention (but will not be bound) to the lowest bid. The building will be 34 by 50 feet; there will be no steeple; three windows at each side and two at front end; posts to be 21 feet between shoulders; gallery in front, only; to be finished by the 1st of September next. Plans, together with all the material part of the specifications, can be seen at the store of Mr. Robert Sloan, in Brushland. The committee will require security for the faithful performance of the contract.
Thoms. Arbuckle
Joseph Alexander
David B. Russell,
Andrew Thompson,
James G. Russell,
Committee

I have yet to find whether or not the building was done by September 1861 but the building that was constructed is believed to date from around that time. This is a picture of the church, which stood about where the Fire Department is located, until its demolition in 1943. 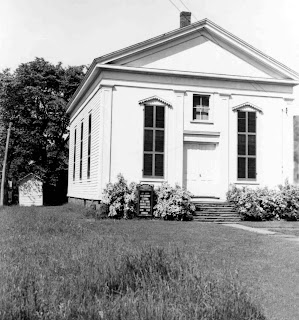