I am happy to report that the Bovina History Pageant (2015) was a big success. It was standing room only as we had over 100 people attend. I'm very grateful to Briana Riera, Chris Ingvordsen, Roz Foster, Doug Perrett, and Marni and Mel Greenberg for all their terrific help in getting this thing off and running. Briana and Marni really helped with a lot of the detail stuff, right down to sequencing when the performers were to come on stage. And Chris and Roz provided not only the lighting but a great collection of costumes. Doug did pretty much any chore that we gave him and made some great suggestions.

For the 2015 version, I used some components of the 1955 program but did scale it down a bit while adding a couple of stories not in the original. With so many busy schedules these days, it was harder getting people who were available to participate, but a number of folks did step forward, including two who participated in the original pageant – Marie Reinertsen Burns and Jim Hilson. And our youngest participant, at barely two months old, was Jim’s grandson, Sebastian Hilson-Schneider.
The program included slides to go with the living tableau. And some segments had only slides. Here’s how the program was structured.


Creation of the Town: This was a review of how the town was created in 1820 and an explanation of the town’s population and geography.

Farming Bovina: I reviewed how Bovina Farming has changed over the years, with several of our participants bringing in items to represent  farming in Bovina over the years: Wheat, represented by a loaf of bread from Bread Fellows, a Bovina based bakery, carried by Hans Hilson-Schneider; Oats, represented by Quaker Oats and carried by Autumn Dorr; Sheep, represented by Annette Robbins, who with her husband Steve, run Green Shepard Farms and came in wearing fleeces from Bovina sheep;  Pigs, represented by bacon and carried by Cullen Riera; Dairying, represented by three generations of a current Bovina dairying family, the Webers, Ed and Donna, their son Cody and their grandson Zachary; Chickens, represented by Heidi Gogins carrying some of her baby chicks; Maple syrup, represented by fifth generation maple syrup producer Kadence LaFever, carrying jugs of her dad Jonathan’s syrup; and Cauliflower, represented by Kim Riera carrying a head of  cauliflower. I also had some slides of Bovina farms to round out this review.
Anti Rent Troubles: I told the story of the lease system that affected most of Bovina in the early 19th century and its involvement in the Anti-Rent War and about Calico Indians. Peter Manning, Gary Mayer and John Tucker portrayed Calico Indians (thanks to Jim Andrews in Andes for the costumes) as I related the climax of the Anti-Rent story, the shooting of Osman Steele at the Moses Earle farm in Andes in 1845.  Peter Manning was ‘arrested’ by Richard Tucker and revealed to be Edward O’Connor, a Bovina farmer who had a farm on Russell Hill Road. This segment concluded with O’Connor in jail writing a letter to his girlfriend’s parent’s just days before he expected to be hung for the shooting of Steele. I read portions of this very moving letter. To read the whole letter, visit this blog for July 23, 2013  -
http://bovinanyhistory.blogspot.com/2013/07/i-did-for-friends-and-liberty-jailhouse.html. O’Connor’s sentence was commuted to life imprisonment days before the scheduled execution. He was released in 1847 when the governor pardoned all the Anti-Renters.
Home and Community: I reviewed some of the organizations that Bovina had over the years, including the Bovina Coronet Band, the Bovina Recreation Club (which hosted the 1955 pageant), the Bovina Fire Department and the Bovina Rescue Squad. From there, I segued to life in Bovina in the 19th century and told the story of when the Gladstone and Biggar families fought with the Bovina Association Presbyterian Church over the issue of dancing (read the October 23, 2010 entry in this blog for the full story of what happened - http://bovinanyhistory.blogspot.com/2010/10/gladstones-and-biggars-clash-with.html ). To demonstrate what the dancing may have looked like, Wendy Buerge, Samantha Misa, Mary Pelletier, Briana Riera, Kim Riera, and Sally Elliott Scrimshaw demonstrated a few of the steps in what probably resembled square dancing or Scottish country dancing.

Veterans: Bovina men and women have served their country since the town’s founding. The Civil War saw over 90 men involved, with eleven of them dying in the war. The first casualty was Sinclair Burns in 1863. His great great great grand nephew, Jack Sinclair Stanton, portrayed his ancestor, carrying Burns’ Civil War pistol. Richard Tucker and Mel Greenberg also portrayed Civil War soldiers, with Mel as a veteran, known in the parlance of the time as an “Old Soldier.” Marcelo Riera represented World War I and Jonathan LaFever, Dario Riera, and Samantha Misa represented World War II. We ended this segment by saluting all Bovina veterans with the playing of “Taps.”
Newcomers: I concluded the pageant with some remarks about a couple of newcomers who came to Bovina in the 90s from the Hudson Valley and married into the established families in Bovina – this was Jeremy Barnhart and Sylvan LaFever, my paternal great grandfathers – and I was talking about the 1890s. Though LaFever and Barnhart now are considered now to be old Bovina names, the first appearance of the names in the late 19th century in town may have been looked at with some askance. There always are newcomers – and sometimes we are newcomers. And though we may have our differences, we are united in our love of this town. So while we air our differences, we should remember to show some respect. And we concluded with Aretha Franklin’s “Respect.”

Thanks to Bill Maden, a You Tube video of the pageant is available at https://www.youtube.com/watch?v=vSnH98jEQbI.

Here's a shot of most of the performers with me in the Community Hall basement before the pageant started, taken by Doug Perrett. 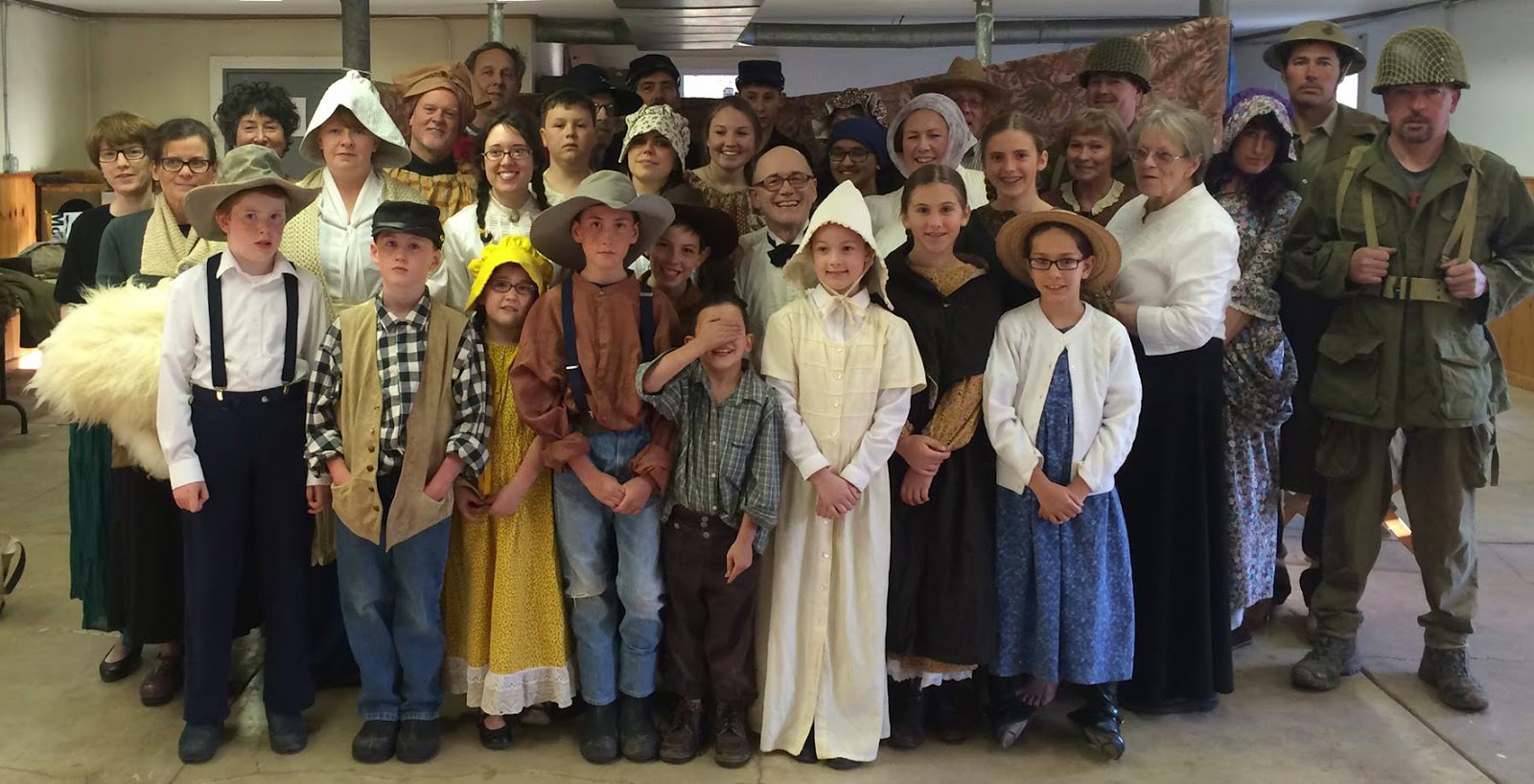 Posted by Bovina Historian at 7:00 AM