Thanks to the generosity of Judy Bauer, I have had the pleasure to read some of her great and great-great grandfathers' diaries, that of Alexander Storie (1814-1896) and of his son John (1863-1944). The diaries passed down to her grandfather, Bill Storie and then to her mother, Rae Storie Vandenbord before passing on to her. I thought I'd share a few Christmas day entries from Alexander Storie (unfortunately, John's diaries are more challenging due to his handwriting, so it might be awhile before I decipher those).

Here's what was going on in Alex's life 140 years ago, covering Christmas Eve and Christmas Day. Note that he doesn't actually mention that it's Christmas: 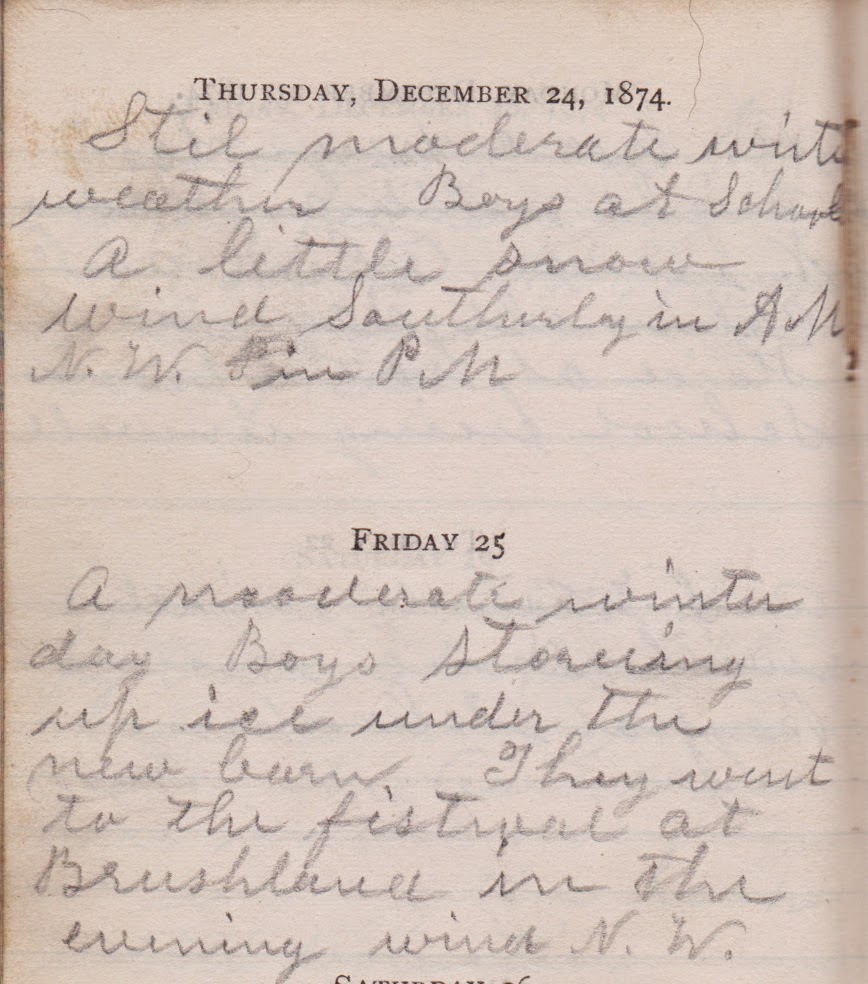 December 24
Stil moderate with weather. Boys at School. A little snow wind Southerly in AM, N.W. in PM.

December 25
A moderate winter day. Boys storing up ice under the new barn. They went to the fistival (sic) at Brushland in the evening. Wind N.W.

Alexander's Christmas five years later in 1879 was unique - one of the few times he spent it outside of Bovina. He and his sister Mary Ann Storie went to visit family and friends in the Fond Du Lac area of Wisconsin: 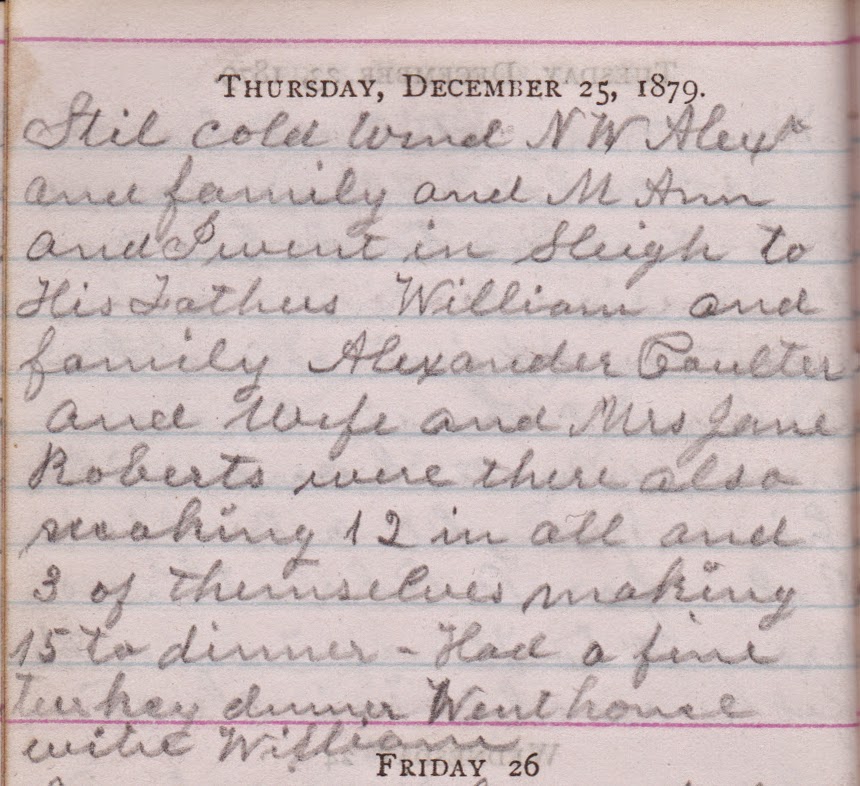 December 25
Stil cold wind NW. Alex and family and M. Ann and I went in Sleigh to His Fathers. William and family, Alexander Coulter and wife and Mrs. Jane Roberts were there also, making 12 in all and 3 of themselves making 15 to dinner. Had a fine turkey dinner. Went home with William.

That's not the end of the Alexanders. The Alexander Coulter mentioned is not a descendant of the early Bovina settler, Francis Coulter, but was the son of James Coulter, another Coulter family that was in Bovina in its early days, and his wife Esther Brush. Esther was the daughter of the early Bovina settler and sister to the Alexander Brush who hosted the Christmas dinner. Alexander Coulter died in Fond Du Lac in 1893. (So it seems likely that the family spent most of this Christmas dinner trying to sort out how they were related to each other!)

One hundred and twenty five years ago, in December 1889, Alex makes a bit more mention of Christmas: 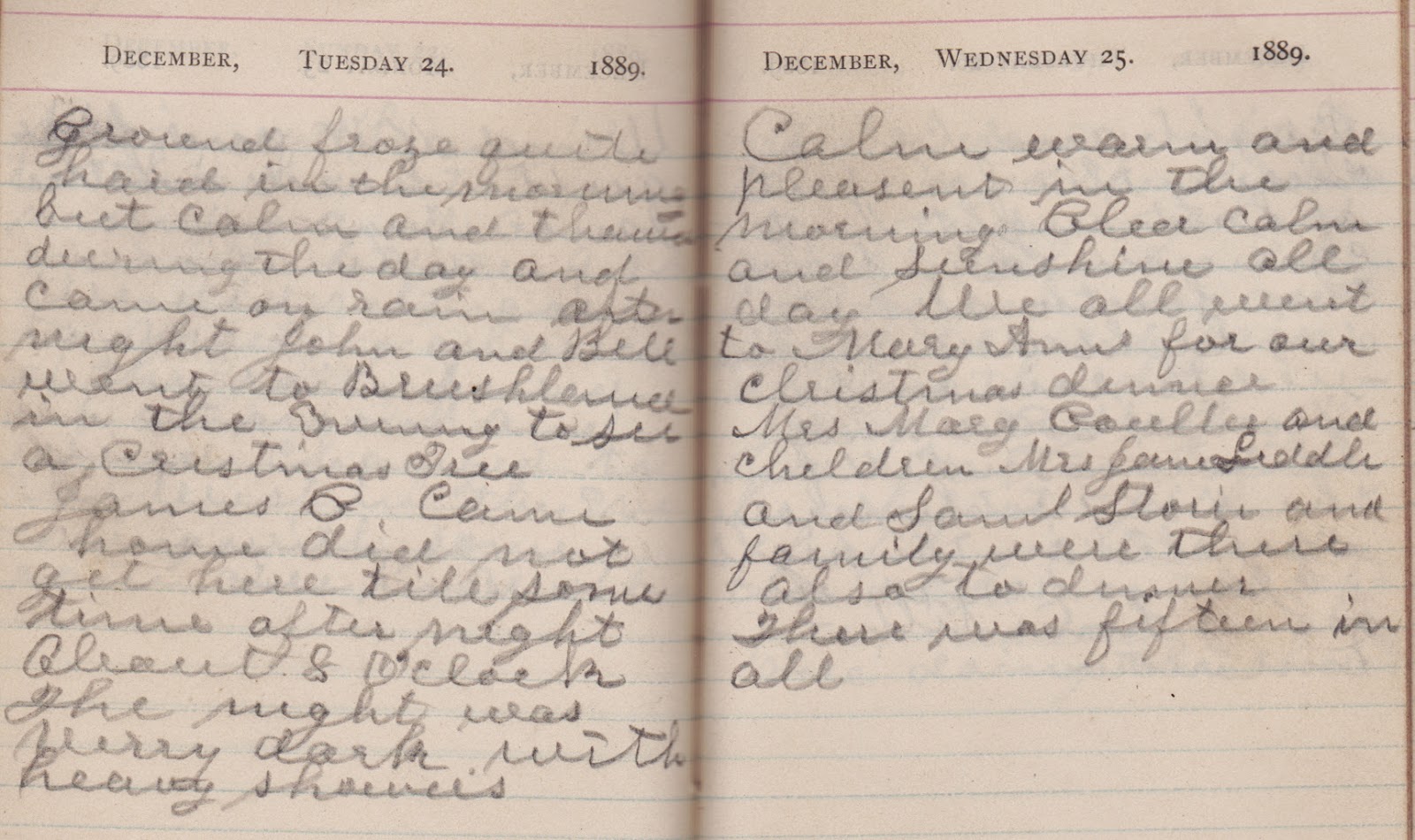 December 24
Ground froze quite hard in the morning but calm and thawed during the day and come on rain after night. John and Bell went to Brushland in the evening to see a Christmas Tree. James C. came home did not get here till some time after night about 8 o'clock. The night was very dark with heavy showers.

December 25
Calm warm and pleasent in the morning. Clear calm and sunshine all day. We all went to Mary Ann's for our Christmas dinner. Mrs. Mary Coulter and children, Mrs. Jane Liddle and Samuel Storie and family were there also to dinner. There was fifteen in all.

The John mentioned probably is Alexander's son. Bell may be Belle Miller, who sometimes helped on the farm. Belle was the daughter of Michael Miller, who lived just down the road from the Stories. James C likely is his son, James Cowan Storie.

The Mary Coulter mentioned probably was the widow of James Coulter, born a Rotermund. Jane Liddle was the widow of Thomas Liddle and was a Coulter, a sister-in-law to Mary Coulter. Jane was related to Alex, her mother being Margaret Storie (her father was Walter Coulter). The Samuel Storie (1847-1922) mentioned is Alex Storie's nephew, son of his brother, also named Samuel.

One hundred and twenty years ago saw a smaller Christmas dinner at home: 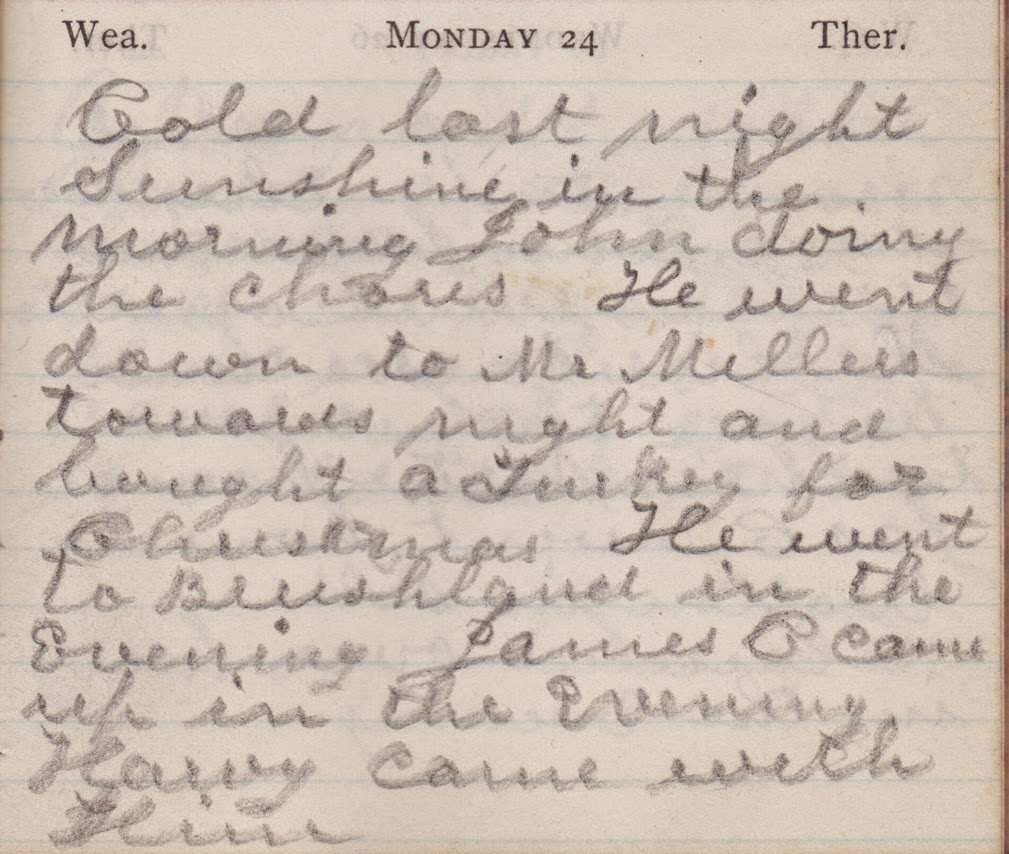 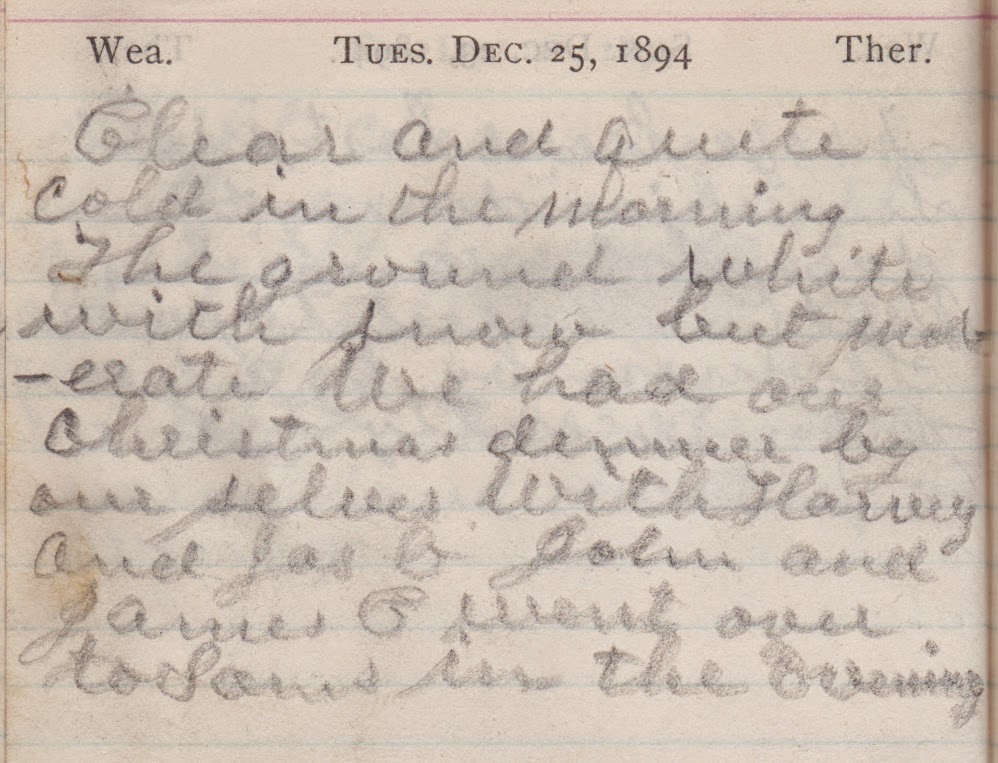 December 24
Cold last night. Sunshine in the morning. John doing the chores. He went down to Mr. Millers towards night and bought a turkey for Christmas. He went to Brushland in the evening. James C came up in the evening. Harvey came with him.

December 25
Clear and quite cold in the morning. The ground white with snow but moderate. We had our Christmas dinner by our selves with Harvey and Jas. C. John and James C. went over to Sams in the evening.

The names in this entry showed up in the 1889 entry, except for Harvey. I have yet to figure out who that might be.

The 1894 diary is the last one to which I have access. This was Alexander's next to last Christmas. He passed away in February 1896 at the age of 81 (though his obituary below from the Delaware Republican for February 15, 1896 says he was 83). 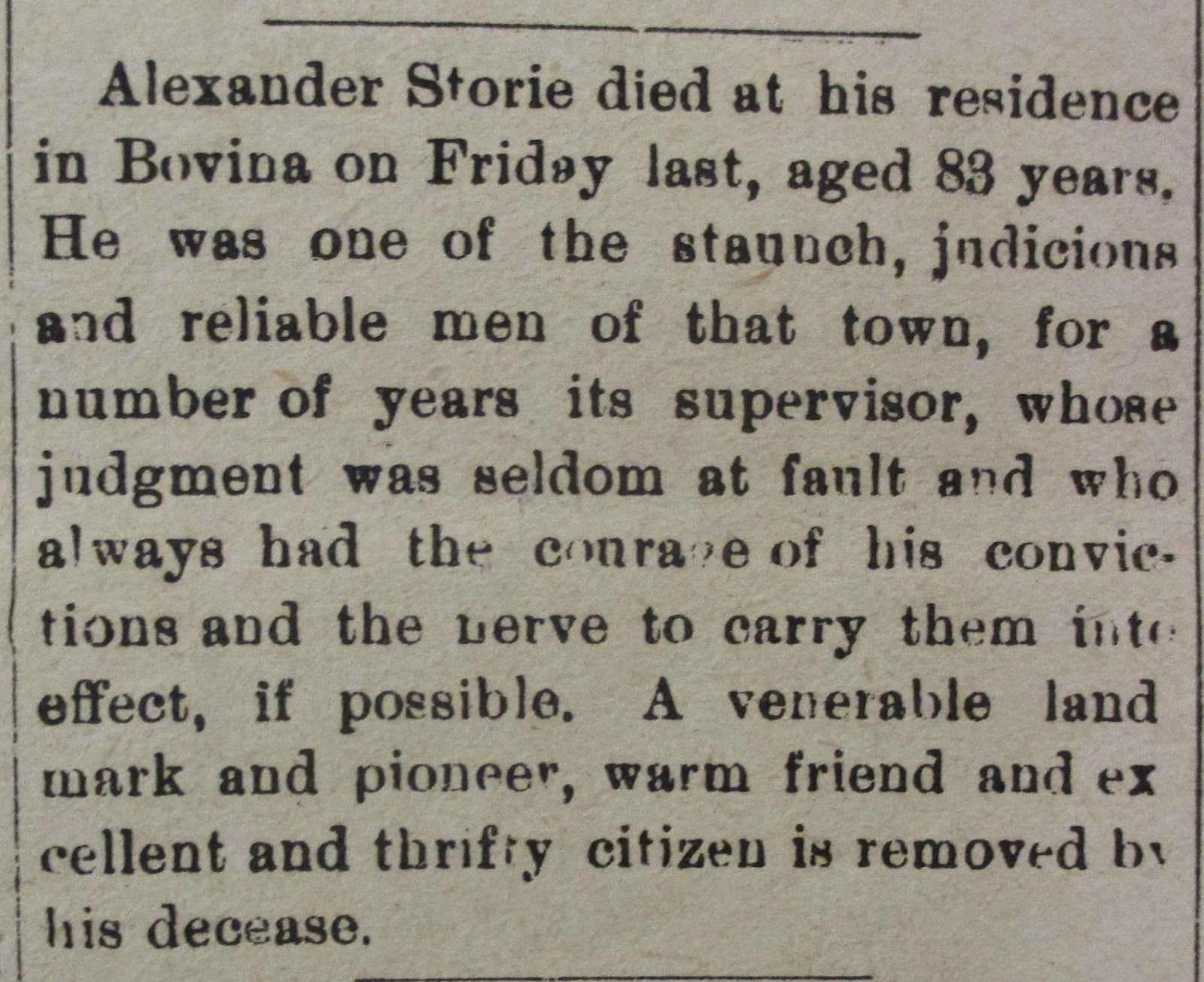 Posted by Bovina Historian at 4:24 PM