Stories from Bovina's Cemeteries - The Tragic Death of Samuel Dean

Samuel Dean died December 13, 1867, when he was only 25 years old.   Born in Bovina, he was the son of John Dean and Elizabeth Johnson.  The Dean's lived in the Reagan Road area of Bovina.  In September 1865, Samuel married Paulina Coan.  They were married just over two years when on December 12, 1867, Samuel and his two sisters, Lucy and Emily, came to Andes to visit a friend.  The Andes Recorder reported that "[w]hile taking care of his horses, Mr. D. received a severe kick from one of them, in the inferior part of the abdomen, on the right of the medial line.  In a few hours severe inflammation ensued." Local doctors were called in but could do nothing. Samuel lasted until the next evening, when after a day of "intense suffering, every hour showing more and more the fatal nature of the injury..." he passed away.   The Recorder noted that "Mr. Dean was a young man, highly esteemed as a citizen and a Christian. He leaves a wife, a widowed mother, two brothers and two sisters to mourn his loss." 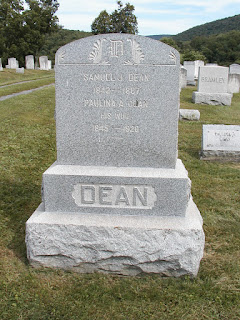 Dean is buried in the Bovina Cemetery.  His wife did not remarry and had been widowed almost 53 years at the time of her death in 1920.
Posted by Bovina Historian at 8:00 AM