117 years ago today, John Hilson, sometimes known as 'Old Jock,' died in Bovina at the age of 69.  His last illness started out as nothing more than a bad foot.  The Andes Recorder reported on May 29 1896 that "John Hilson is laid up with a sore foot at this writing."  A couple of weeks later, the paper reported that what seemed like a minor ailment had become more serious:  "John Hilson, whom we recently mentioned as being laid up with a sore foot, is now seriously afflicted.  His trouble started from paring a corn to[o] close, and his blood being in bad condition, inflammation set in and then gangrene followed.  Drs Phinney, Gates and Wight were here Monday in consultation. His great toe was amputated Wednesday, but grave fears are entertained as to the final result."  Within a week, the doctors were back to perform another amputation.  At first, this appeared to do the trick.  In its June 26, 1896 issue, the paper said that "John Hilson is to all appearances improving slowly."  A week later, the Recorder reported the situation was about the same, but within a couple of days of that report appearing, Hilson died.  His death and a brief obituary appeared in the July 10, 1896 Andes Recorder:

Another of our oldest citizens has crossed the river.  John Hilson died on Sabbath, July 5.  He was born in Scotland, May 25, 1827, and came to America in 1850.  After coming here he worked at his trade – a plasterer for four years.  In 1854 he was married to Hannah S. Hamilton, who with one son survives him.  He then farmed it until 1867, when he opened a store in Bovina Centre, where did a large business, until he retired in 1889.  He was succeeded by his son, Alexander, who soon afterwards took John W. Blair into partnership, but is now in business alone.  Soon after he retired from business he visited this old home in Scotland and had talked of crossing the ocean again this summer.  He had held several town and county offices, among them County Superintendent of the Poor.  His pastor, Rev. W.L.C. Samson, officiated at the funeral which was held at one o’clock Tuesday.

While the Hilson family had to deal with this loss, Alexander's infant son was ill with whooping cough.  On the afternoon of his grandfather's funeral, he died, age about two months.  He was buried two days later. 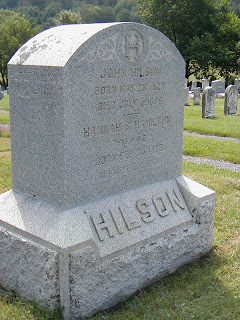 The November 27 Andes Recorder reported that "A fine monument has been erected to the memory of the late John Hilson.  Dauley and Wright, of Oneonta, furnished it."
Posted by Bovina Historian at 8:00 AM