Stories from Bovina's Cemeteries - What Ever Happened to Edward O'Connor?

One-hundred and fifty years ago this month, on May 4, 1863, Edward O'Connor, famous for his prominent role in the Anti-Rent War in the 1840s, died in Forestville (Sanilac County) Michigan.  Born in Bovina in 1819, he was one of the over 100 men arrested for the murder of Undersheriff Osman Steele in August 1845 at the farm of Moses Earle.  O'Connor, along with John Van Steenburg, was sentenced to hang for the murder.  Their sentences were commuted then not long after that O'Connor and Van Steenburg were pardoned.They received a hero's welcome on their return home.

At the time of Edward’s arrest for the murder of Steele, he was 26 years old.  His sweetheart, Janet Scott, waited out his arrest, sentencing, imprisonment and release and on April 8, 1847, married him.  Edward and Janet continued to live in Bovina.  Their farm was where the Millard Russell farm is on Russell Hill.  O'Connor held several offices in Bovina during the 1840s and 50s, including Town Clerk, Clerk of Elections, Tax Collector and Highway Commissioner.

Edward and Janet had three children, Mary, Fanny and Edward David.  Edward’s marriage to Janet was relatively brief, with Janet dying on May 4, 1858, not long after giving birth to her son.    On December 1, 1859, Edward married Fanny Brainard of Colchester, widow of John Brainard.   He moved to Colchester, probably right after his marriage to the home of his new wife.  Sometime around 1861 or 1862, his daughter Fanny died and was buried in Bovina. Around this same time, Edward left Downsville and moved to Michigan.  When he left Delaware County, his new wife and children did not go with him.

Why did Edward go to Michigan and under what circumstances?  There is evidence in the Bovina United Presbyterian Church Minutes that he was in considerable trouble.  He did not move away from Delaware County but ran away.  On December 16, 1861, at a regular meeting of the Session, it was reported that “...Mr. Edward O’Connor, has fled the county having been guilty of a breach of the 7th [adultery] and 8th [theft] Commandments and session agreed unanimously to suspend Mr. O’Connor until said reports can be investigated and further information obtained.”   On July 15, 1862, O’Connor was suspended from the church indefinitely based on the facts that “1. that said O’Connor has fled the county, 2. that he has been found guilty of fraud (by the civil authority), 3. That he is charged with a gross breach of the 7th commandment.” O'Connor was only in Michigan about a year and a half before his death, which happened exactly five years after the death of his first wife.  He appears to have started a family there, fathering at least one child before he passed away.

We will never really understand all the issues that drove him to take this step. This was a man who was sentenced to death, went to prison, and lost his wife and at least one child within about 10 years.  Something may have just snapped.  Or maybe at some point he decided that his second marriage was a mistake. From 150 years away, we cannot judge O'Connor for the actions he took.  It is a sad ending to a relatively short but eventful life. 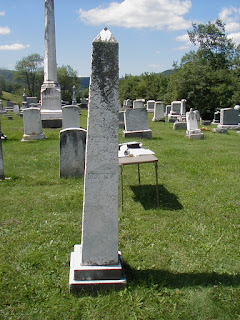 This is the O'Connor family monument.  It has not worn well and is a challenge to decipher.
Posted by Bovina Historian at 8:30 PM