150 years ago today, on April 4, 1863, Sinclair Burns became Bovina's first fatality in the Civil War.   Born in Bovina on August 29, 1841, Sinclair was the son of John and Nancy Burns.  He enlisted on his 21st birthday to serve for three years in the 144th infantry, mustering into Company E on September 27, 1862 as a private.  The Town of Bovina paid him a bounty of $150 for enlisting.  At the time of his enlistment, he listed his occupation as farmer.  He had gray eyes, brown hair, and a fair complexion and was six feet in height.


A little over six months after he was mustered in, Sinclair died of typhoid at the Fairfax Seminary Hospital in Virginia. His remains were sent back to Bovina for burial.  Sinclair was survived by his parents and a number of siblings.  Fourteen years later, his mother Nancy died and was buried near her son.  Sinclair's father, John, survived his son by 33 years, dying in 1896.  The last of his siblings to pass away appears to have been his younger brother Alexander.  Alex died in 1939, having survived his brother by 66 years.  It is through Alexander Burns that I am related to John Sinclair.  Alex's daughter Ella married my great grandfather, Sylvan LaFever.  So Sinclair is my great great great uncle (though my genealogy software notes him as my 2nd great grand uncle). 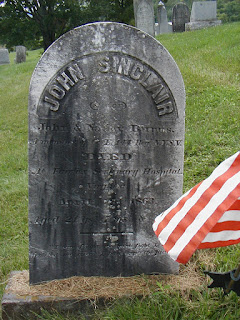