Faces of Bovina - the McKenzie Sisters 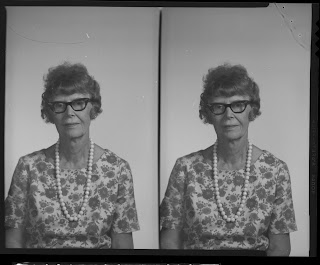 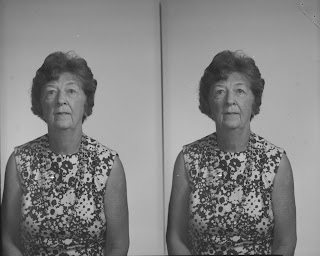 In August 1972, sisters Janet and Elizabeth McKenzie had their passport pictures taken by Bob Wyer in Delhi.  These certainly were not the first such photos.  The sisters had extensive travel experience throughout their lives. While not life long residents of Bovina, they spent considerable time in the town.  I have many fond memories of these delightful sisters.

Janet and Elizabeth were the daughters of the Reverend Peter McKenzie (1869-1948) and his wife Elizabeth Gordon McKenzie (1874-1950).  They moved with their father several times as he progressed in his career as a minister.  Janet was born in 1898 in Auburn, New York.  Elizabeth was born in Palmyra, New York in six years later.  Janet and Elizabeth had a brother, Gordon, born in 1901 and a younger sister Margaret, born in 1906.  Their father was born in Hawick, Scotland and came to the United States in 1884.  Reverend McKenzie had several pastorates in New York, including Avoca, Naples, Utica, and Schenectady.  Around 1918, he and his family first became familiar with the Catskills, taking a vacation in New Kingston.  In 1925, the McKenzies settled in Stamford when the Reverend became the pastor at the Presbyterian Church there.

Janet and Elizabeth both became teachers in New Jersey, living in Hackensack and later Newark.  Their father and mother ended up living in Newark also, but they bought a vacation home in Bovina, the house across from Russell’s and now owned by Amy Burns.  Janet and Elizabeth inherited the house upon the death of their parents and spent many summers there in the 50s, 60s and 70s.  Their sister, Margaret, and her husband, Ed Coleman, lived kitty corner from Janet and Elizabeth in the house where Joe and Connie Dibble live now.

One attribute that Janet had that was memorable to me from an early age was that she had one leg shorter than the other - significantly shorter.  Janet had a special shoe to make up the difference.  She never seemed self conscious about it - it certainly never stopped her from her career or from her travels.  And she had a great sense of humor about it.

Sometime in the early 70s, when I was a teenager, I took a phone call from Janet - she was calling to ask my Dad to come down and look at her television (Dad did TV repair).  When I asked what the trouble was, she paused a bit then said that when the telephone rang the TV would turn on - and usually at very high volume!  I wondered if maybe she was nipping at the sherry or something, so I went down to see what she was talking about.  Sure enough, if the phone rang the television turned on or changed channels.  It turns out the problem was the remote control.  It was one of the first remote controlled televisions I ever saw.  In the early days, such remotes used a tone to turn on the TV and change the channels.  The telephone had just the right tone to mimic the remote.  The solution was to live with it and when out of the house, unplug the TV.  Both sisters found the whole situation quite amusing.

As noted earlier, Janet and Elizabeth traveled extensively.  Several records related to their travel were found on Ancestry.com.  Reverend McKenzie and his wife and daughters Janet and Elizabeth made a trip to England in 1934, returning home in August on the Majestic.  The Andes Recorder reported in its July 8, 1938 issue that "Rev. and Mrs. Peter McKenzie went to Newark, last Thursday to see their two daughters sail on a trip covering six weeks in Finland." [I'm assuming the daughters were Janet and Elizabeth, though it's possible one of the daughters instead was Margaret.]  In July 1941, Janet and Elizabeth traveled to Guatemala.  Janet and her father made a trip to Scotland in 1947.  In 1952, the sisters flew to Ireland.  Three years later, Janet went to England, returning on the Queen Elizabeth in April 1955.  I am sure there were many other trips not documented through Ancestry.com.  Later in life, I recalled them spending at least one winter in Costa Rica.

It has been 40 years since I took my first ever overseas trip - a week in England in April 1973.  For a graduation present, the sisters, knowing I had just been there, gave me an old travel book about England that I still treasure.  Their traveling has inspired me to make a number of subsequent trips.  Here's what they wrote inside that book: 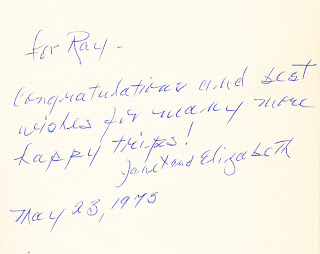 Janet and Elizabeth made their last winter trip together in the winter of 1978, visiting friends in Mississippi.  When they came back to Bovina in the spring, Elizabeth was ill and passed away that summer.  Janet stayed in Bovina for a few years then settled in a retirement community in Florida to be near her brother Gordon.  Janet died in 1987 (on my birthday, as it so happens).

Janet got one last joke in after her death.  My mother was working at the Bovina Post Office in 1987.  When she came in one day to work, Pat Parsons (now Pat Miele), the post master, pointed out something in the safe.  Mom found a large envelope addressed to Janet.  When Mom pointed out that Janet had just passed away, Pat explained that the envelope contained – Janet!  More precisely, Janet’s ashes.  She would have gotten a big chuckle out of it all.


Note:  This is one in a continuing series called "Faces of Bovina," using photographs of people from Bovina taken by Delhi photographer Bob Wyer.  Thanks to the Delaware County Historical Association for allowing the use of these images.

Please share your stories about Janet and Elizabeth in the comments section of this blog.

Posted by Bovina Historian at 10:04 AM