Up the Bovine Valley from Delhi-Andes Road and other views

The Delaware County Historical Association (where I work as the archivist for two days a week) has an extensive collection of postcards from Delaware County.  I recently scanned the cards from Bovina and want to pass along some samples.

I'm looking for some help identifying this first view (mislabeled 'Bovine Valley').  From the image and caption, I suspect it's what is now County Route 6 looking towards the Bovina Center hamlet in the area of Route 28, but I'm not recognizing the house.  Any ideas? 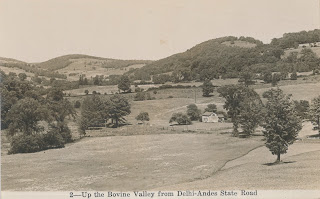 This view below is somewhat familiar, but not this particular photograph. It predates the 1920s and was taken on the hill behind what is now Tim McIntosh's house. 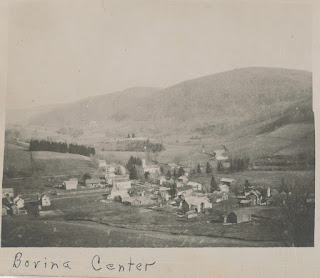 It's the first clear view I have found of the Seacord Hotel, which stood where the Lil Hilson and Mark and Julie Schneider houses now stand. It was in this hotel on October 1, 1844 that the various Anti-Rent organizations in Delaware County gathered for what was called the Delaware County Equal Rights Convention.  The party nominated candidates for the Assembly and passed two significant resolutions related to land issues in the county:

Resolved: That the Feudal tenure as it exists between Landlord and Tenant in the State of New York, is anti-democratic, opposed to the interests of an institution governed by a free and independent people.

Resolved: That the present system of land ownership as it exists at the present time, is a stigma upon the sons of our illustrious forefathers.

The hotel was demolished around 1920.  Below is another copy of this image with an arrow marking the Seacord Hotel. 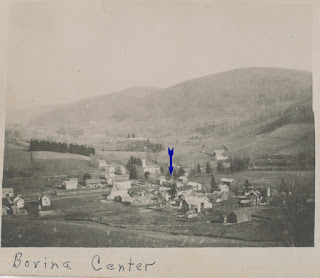 And finally, in the postcards at DCHA was this homemade card with a series of eight Bovina stickers showing various views.  They likely date from the 1920s.  Views include the now gone Scott's Bridge by McPhersons and the demolished Bovina Reformed Presbyterian Church, as well as the original Bovina Center Coop Creamery buildings. 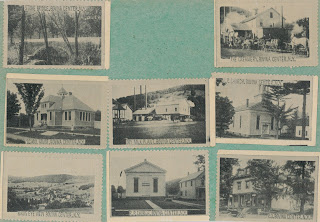 Posted by Bovina Historian at 10:25 PM