Thanks to Tom Hoy, a former Bovina resident, here's an article about the new Bovina School building - the building that is now the Bovina Public Library.  This was an exciting find, helping me to pinpoint more precisely when the school was built - namely, the summer of 1893.  The article comes from the December 16, 1893 issue of the Stamford Recorder and includes a photo of the new school. 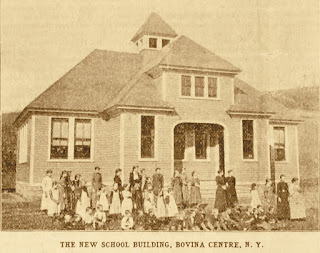 Recently a representative of the Recorder visited the above mentioned school and found it worthy of mention.  The new school building is a model and modern one, erected last summer.  For many years a suitable school building has been very much needed, and now that it has come all are pleased, we doubt not.

Bovina has always given attention to education and has been for many years a large and constant patron of the schools at Andes, Delhi, Franklin and Walton.  Many of her young people have passed through college and a considerable number have entered the ministery (sic) and the professions.  Distinction and prominence because of inherent ability have come to Bovina’s sons and daughters, on the battlefield of life.  Now that better educational advantages have been provided a new impetus will be given to educational matters.  The Recorder has before suggested the apparently feasible plan of make the Centre school an advanced one and the others in town feeders or primary schools, and would call attention to the idea again.  The town is small and so located that it might be made practically one district.

The people of that town will be pleased to see herewith a good picture of the novel building.  Its size is 27x52 feet and the porch and coat rooms in front are 8x27 feet.  The rooms are 12 feet in height and neatly finished.  The building is covered with slate and nicely painted. It was constructed by Jas L. Coulter on contract, and the work well done at a very low price.  The entire cost of building and furnishings was about $2,800.  The interior is divided into two school rooms which are connecting.  The one to the north or right of the picture is used for the higher department and the other for the primary grade.  The entrance is thro’ the vestibule on either side, and the arrangement is very satisfactory.

The school is undoubtedly prospering at present and the work being done comports with the good style of the building.  There are thirty six enrolled in the higher department over which Miss Lula E. Burns presides.  She has just cause for being proud of her scholars, one of whom is a academy graduate and seven are former academy students.  Miss Burns is a graduate of the Albany Normal School, class of ’87.  After graduating she taught five consecutive years in a school on Long Island and last year at Portchester, N.Y.  A brief visit led to the conclusion that she is an interested, painstaking and accomplished instructor.  She wisely devotes attention to singing and the scholars are advancing in this direction.  Miss Burns is a native of Delhi.

Miss Emma Campbell, who is in charge of the younger portion of the school, is a daughter of Duncan Campbell of that town.  She, too, possesses the qualities of a successful teacher, and although she has taught only four terms she has a correct appreciate of the important work in hand, and her teaching is giving much satisfaction.

We have devoted attention to this school because it is an advance movement and so far as we have learned is the first “model” rural school house in the county.

Teachers and scholars are now making an effort to purchase a piano for use in the school, which will doubtless meet with hearty encouragement.  An oyster supper and fair is being held this Friday night, and the Recorder will do something to assist in the enterprise.  It expects that extra copies will be delivered at the hall within two hours after leaving the press and be sold for the benefit of the fund.  That’s our style of enterprise.
Posted by Bovina Historian at 5:25 AM