Faces of Bovina - Man with fish

In the Bob Wyer collection at the Delaware County Historical Association, there are numerous photographs of men holding fish (I'd love to do an exhibit of these some day).  For this installment of my Faces of Bovina series, here is one of those photos.  The gentleman is Noel Gonyo, who was the brother of Florence Thomas.  Born in Nebraska in 1913, he was living in Bovina in the 1940 census.  Noel was a veteran of World War II, serving in Africa and the Middle East.  This photograph dates from May 5, 1948. 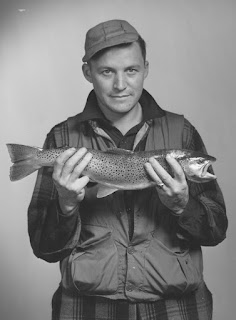 My main memory of Noel was in the late 70s when he went to Mexico for an arthritis treatment that made him a new man.  A number of people around Bovina followed suit, including Jim Burns, as did people from further afield, such as my grandparents, Ben and Anna Bell LaFever and my sister Susan's father-in-law, Ed Hughes.  Noel passed away in 1985.

A request (and what will be a reminder at the end of each of these Faces of Bovina entries) – I would love it for people who remember Noel to share their memories – incidents, small stories, whatever – through the use of the comments feature of this blog.  And I would appreciate it if you would include your name in your comments.  Most people who respond to a blog have some kind of alias or post anonymously.  For the historical record, I really would like to know who left the comment. Thanks.


Posted by Bovina Historian at 8:42 AM