Reverend Robert Laing, the first pastor of what later became the Bovina United Presbyterian Church, is buried in the Associate Presbyterian Church cemetery on Reinertsen Hill Road.  Laing was a native of Scotland, born a few miles from the city of Perth in 1750.  He was the minister for a congregation in Dunse in Southern Scotland for eight years.  He was removed from his charge by the Presbytery; the reason why has not been provided.  In 1795, he came to the United States and was employed as a minister almost as soon as he landed.  Laing had three pastorates in America:  Buffalo, Pennsylvania; South Argyle, New York and finally, Bovina.

Laing’s availability for Bovina came as a result of his being removed as pastor of Argyle.  He was accused of being intoxicated on August 26, 1810 - a charge to which he readily confessed.  After being rebuked by the Presbytery the matter was considered closed, but apparently his congregation disagreed and in January 1811 members requested dissolution of his pastorate, “alleging that his usefulness was at an end.”

Laing came to Bovina in 1814 and was pastor for nine years.  The congregation was happy to have a pastor, having gone its first five years without one.  The History of the Presbytery of Argyle, published in 1880, noted that after nine years “offence and trouble must needs come, as in Argyle, and on the 8th of May, 1823, he was rebuked and suspended from the ministry by the Presbytery.”  His relationship with the congregation was dissolved a month later.  A year after that, Laing was restored to membership in the Presbytery but he did not attempt to find another pastorate, instead staying in Bovina for the rest of his days.  The specific reasons he was removed as pastor are not provided.  In his autobiography, Laing’s successor, John Graham, noted that eight years from the time Mr. L was ordained among them had scarcely expired, when the Presbytery found it necessary to loose him from his charge and declare the pulpit vacant. More about this unpleasant affair I do not feel at liberty to speak, as I do not deem it would be for general edification to rake up the ashes of those fires which once burned so hot, but which are now happily put out, I trust forever.”

The Bovina pulpit was vacant for nine years, possibly because Laing made it too hard for any prospective candidate.  Graham reported that “young men were afraid of preaching before such a critic as Mr. L. and that he did all that lay in his power to terrify and drive them away.”  When Laing heard that the congregation was ready to call a new minister “he was sure to go . . . and ‘examine the laddie’s quilts’ and then went to certain quarters, where, as he said, he ‘tore them a’ to tatters.’”

This was not Graham’s experience, however.  He said Laing was very accommodating and often would help with the dispensing of communion.  Laing was last able to help with communion around 1835 when he was 85 years old.  He became too infirm to attend services for the last four years of his life, though he was kept apprised of what was going on in Bovina and in the Associate Presbyterian Church in general.  He died on 29th of May, 1839.

His obituary, published by the Associate Synod of North America in its Religious Monitor and Evangelical Repository for June 1839, said that “to say that Mr. Laing was entirely free of vanity, that his own natural temper never involved him in difficulties, or obtained the ascendency over his judgment, or that in a debate he felt not desire to tease and vanquish an opponent, is what none of his friends will maintain.  But though he was not without his faults and failings, yet these, we are disposed to believe, were too often magnified...  A conviction of this, and a sense of his innocence when called upon in Presbytery to face his accusers, tended to rouse his mind and summon all his powers to defend himself ... not only with strong arguments, but with sharp, pointed and poignant sarcasm, so that he caused to lie prostrate before him...the questionable testimony of prejudiced witnesses,... or, to use a favourite phrase of his, ‘he cut them all to pieces.’  He often said that he had been a man of war from his youth, and was determined to die with his face to the enemy; but long before he left this world of troubles, he changed his sentiments, and put on the bowels of forgiveness, patience, meekness, and love.  For these two years past he was never heard to speak a world unfavorable even of those whom he thought had injured him.”

This obituary noted that Laing as a preacher was unusually popular.  He had a “strong, well-regulated voice” and “a dignified appearance.”  It was also said that “He failed not to attract the attention, and gain the affections of the people wherever he was sent to preach.”  The members of the Bovina congregation certainly held him in high regard - he was buried within feet of where he once preached to the enthralled members of the Association Presbyterian Church of Bovina congregation.  This stone, however, was not erected until over 20 years after Laing's death, possibly replacing an earlier one.  In January 1858, the session voted to erect a monument to the memory of Rev. Laing.  The stone was purchased by pastor and moderator, James B. Lee, at the end of 1859 and likely was erected in the spring of 1860.  By the time the stone was erected, the name of the church had changed to the United Presbyterian Church of Bovina.  This is reflected in the inscription on the stone.

As can be seen in the accompanying photograph, courtesy of Ed and Dick Davidson, the top of the stone in large letters says ‘Our Pastor’  As well as providing his name and death date, it notes that he was the "First pastor of the U.P. Church, Bovina, New York" and that he died in his 89th year and the fifty-second of his ministry. At the bottom, partially cut off by the concrete base that obviously was added later is a verse from the King James version of the Bible, 2 Thessalonians 2:5:  "Remember ye not, that when I was yet with you, I told you [of] these things?" 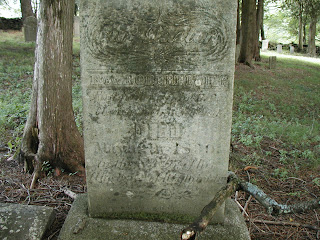