In Abraham Lincoln’s eloquent second inaugural speech delivered on March 4, 1865, he talked about the approaching end of the Civil War and what was facing the nation, including the need “to care for him who shall have borne the battle and for his widow and his orphan…”  Twenty two years after the end of the war, the issue of soldier relief shows up in the Town of Bovina records.  The Andes based Fletcher Post Number 221 of the Grand Army of the Republic, the Civil War veterans organization, notified the Town of Bovina that it was prepared to provide assistance to veterans and to families of deceased veterans in the town.  Below is the text of the notice, dating from January 10, 1888:

To the Town Clerk of the Town of Bovina: Take Notice that Fletcher Post No 221 GAR have by a resolution adopted at a regular meeting of said Post determined to undertake the relief of indigent and suffering soldiers, sailors and marines who served in the war of the rebellion and their families and the families of those deceased who need assistance in said town of Bovina as provided by Chapter 706 of the session laws of 1887.  The relief committee for the said town of Bovina duly appointed by said Post under said act is Henry Hogaboom, William Richardson and John R. Hoy which said committee shall hold office until their successors are appointed.

Hogaboom, Richardson and Hoy were all war veterans.  The Relief for Indigent Soldiers and Sailors law, passed by the State Legislature in 1887, provided funds for indigent Civil War veterans and their dependents.  The funds were to be provided by the town, drawn on by the commander of the local post of the GAR.  If a town did not have a local post, the nearest post in a neighboring town would do so.  Since Bovina did not have its own post, a committee of people from Bovina was created by the Andes-based Fletcher Post.

It appears from the available records that at least one Bovina soldier received assistance.  In 1888, the year the law passed, assistance was given to veteran James ‘Jimmie’ McClure.  McClure, a native of Dumfrieshire, Scotland, was admitted to the Delaware County Poorhouse in December 14, 1887.  He was single and his habits were noted as ‘intemperate.’  The cause of his dependence was old age and destitution.  The poor house record noted that he had not received public or private relief earlier.  He was admitted to the poor house as he awaited transportation to a soldier’s home.  That never happened.  At some point the following year, he moved to Bovina and became a charge of the town.  He received a pair of boots, a pair of socks, one shirt and a paper of tobacco, as well as one bottle of Janes Expectorant from the town overseer of the poor.  The town also paid $21 to board McClure for seven weeks.  The overseer was paid $5 for “care in sickness.”  This may have been his final illness.  McClure died in Bovina in November 1888 of heart disease.  His death was reported in the Delaware Gazette:  “Jimmie McClure , the eccentric character so well known here and in this vicinity, died in Bovina last Friday. "  Though not recorded in the account books, McClure’s burial in Bovina likely was paid with some kind of public assistance.  Below is his headstone. 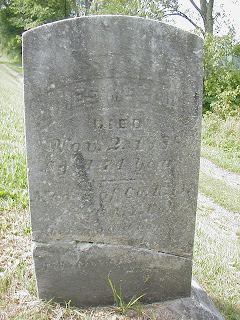 Posted by Bovina Historian at 6:00 PM