Tim Mallery recently shared with me this news clipping from the June 26, 1936 Binghamton Press and it contained quite a surprise. During the late 19th and early 20th centuries, there were a lot of surveys and discussions about where best to create reservoirs to supply water to the ever increasing population in New York City. I only found one brief reference in the early 20th century to Bovina ever being considered for submersion. Tim's find, however, put the debate still going on in the 1930s and 40s. The map from 1936 shows a number of smaller reservoirs being considered to feed into the larger reservoir.  One option was to dam up the Little Delaware, which would have flooded Bovina Center and Lake Delaware (aka the Hook). 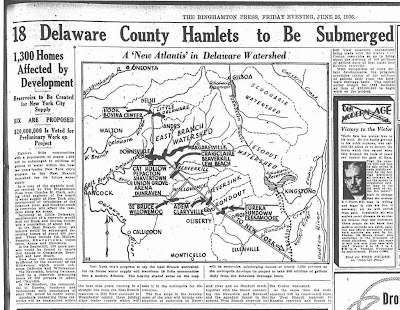 The Little Delaware still was being considered as a reservoir in the spring of 1948. The April 30, 1948 issue of the Catskill Mountain News carried an article from the Walton Reporter: "It is reported that New York city geologists have been in the Little Delaware valley the past week, looking over the soil and rock formations and that this summer New York city will again make a survey of the valley as a possible location for an additional reservoir." The damming of the Little Delaware never happened, but I've more research to do concerning how far along this idea went - and why it ultimately did not happen. So be looking for further developments.  And thanks to Tim Mallery for passing this discovery on to me.
Posted by Bovina Historian at 8:04 PM