This temperance effort did not last long.  Liquor dealers in 1847 won approval from the state legislature for a second vote.  More than half of the towns that voted 'dry' in 1846 opted to go 'wet' a year later.  Bovina's 1847 vote, though much closer than in the previous year, was still for 'no-license.'  Here's the inspector of elections statement at the end of a series of tally sheets showing that Bovina voted no license in a close tally - 83 for no license, 72 to allow the sale of alcohol (with one blank ballot). 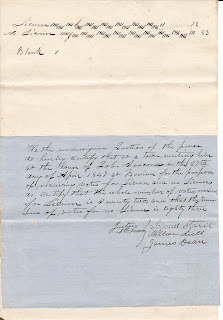 The state legislature later that year repealed the option law, reinstating state regulation of the sale of alcohol and taking the choice away from the towns and cities.  By January 1848, Bovina was again issuing licenses to retail 'strong and spirituous liquors,' such as this one below to Alexander Kinmouth. 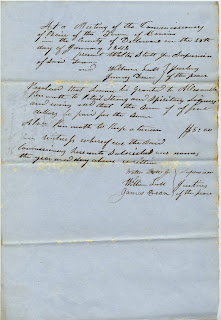