Bovina in the Civil War - Exemption from Service

Though all men between 18 and 45 in Bovina during the Civil War were liable for military duty, not all of them served.  I reported in last month’s entry about one soldier who appears to have evaded the draft by going to Canada, but there were legal approaches to and legitimate reasons for being exempted from service.  There was a process for claiming exemption due to health or circumstances.  The Bovina town clerk files have claims for exemption from military service made during the Civil War from forty Bovina men.  Thirty three claims were made in 1862, with another six men filing claims in 1864.  Four of the claimants from 1862 filed new claims in 1864.  There also is in the files one claim that dates back to 1859.

The claims usually were related to health issues, especially those involving the feet and legs.  Given that the Civil War soldier moved predominately on his feet, healthy lower limbs were essential.  Robert R. Scott said he had “thickening of the periosteum or periostitis of the head of the tibia connected with the inner side of the right knee joint.”  James Laughran had cut his knee so as to produce a permanent injury to the joint.  He suffered from lameness after extra exertion.  Elisha B. Maynard not only had webbed toes, but could not ride on horseback without considerable pain.  Elijah Nichols reported that he was “not sound in limbs (to wit) two of his toes are on the right foot the other on the left foot is turned under so that he walks on the end of his toes the nail resting upon the sole of his shoe or boot which causes lameness at times so he can not walk without causing great pain and causes nuisance in traveling.”

Other health claims included asthma, rheumatism, deafness, and partial blindness.  Some complaints were somewhat obscure in today’s language.  James T. McFarland simply reported “being ruptured” - maybe he was referring to a hernia.  Thomas Dickson had a “tendency to spontaneous hemorrhage" (possibly nosebleeds) while George Close reported that ten years earlier he got caught between two trees which “broke in his right side.”   There were two claims in the files not related to health.  William Seacord and Edward Boggs claimed exemptions because they were teachers.  And Robert Post, who had claimed an exemption for himself in 1862 because of health, filed one for his son Elijah in 1864, claiming that he was only 16 years old and too young to serve.

As noted above, four Bovina men filed exemption claims twice – in 1862 and again in 1864.  Archibald Maynard (Elijah Maynard’s brother) submitted a lengthier claim in 1864 on the same issues that afflicted him in 1862, namely the fact that he was blind in the left eye and limited in vision in the right eye.  Jonathan Adee, who claimed that he was not able bodied and broken down in health in 1862, more specifically stated that he had what his doctors called “hepatization of the left lung” which caused him frequent pain (hepatization is when lung tissue changes into a solid mass like the liver).  Wilson McFarland, who claimed in 1862 to be exempt because of “bronchial affections of the throat of long standing,” claimed two years later to be exempt because he had “lost all his upper teeth.”

There possibly were other exemptions filed that have simply over time disappeared.  And the claims do not include information on whether or not the claim was accepted.  A review of the military rolls from 1862 and 1864 does not clarify the information.  Some men who filed in 1862 do not show up on the 1864 roll while others do.  There’s no pattern as to the condition for which they claim exemption.  It could be a sign that some claims were believed and others were not – or it could simply be poor record keeping.  Regardless of what can be found in the records, none of the men for whom we have exemption claims ultimately served in the war.

Below are two of the 40 exemptions in the town files - Edward Bogg's exemption claim because he is a teacher and that of Robert Post, claiming an exemption due to ill health.  Further examples are available on the Bovina NY Flickr page at http://www.flickr.com/photos/30793716@N06/sets/72157625959037085/. 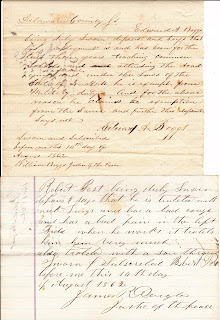