Bovina had a busy weekend.  Friday night was the first Bovina Talent Under the Tent.  A number of folks came forward to share their entertaining skills.  Mary Hetterich, soon to be a vocal music major at Ithaca College, sang, accompanied by a friend (sorry, I didn't get his name).  Janet Stewart and her grandchildren told a story in music about a bear.  Two groups of Bovina's young women showed off their dance skills to great acclaim.  Harlo Bray, Chico Finn and Matt and Andy Pelletier, all musicians of the 'Bovina Rock' school, also performed.  And Bovina's librarian, Marjorie Miller, shared her vocal talents honed on Broadway.

Saturday was the actual Bovina Day - traffic in town was quite impressive.  Traffic jams are not the norm in Bovina.  Both Russell's Store and Heaven on Main Street were doing a booming business, as was the ice cream truck, driven by June Burns (sales benefiting the UP Church).  The museum was open in the morning to about 25 visitors.  There were yard sales about as far as the eye could see.  And the Bovina Library was doing a booming business in used books. 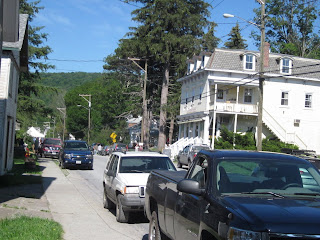 The afternoon saw the Bovina Day's 3rd annual vintage base ball game between the Bovina Dairymen and the Fleischmann's Mountain Athletic Club.  As Harlo Bray succinctly described the game "Up 6-1, after 3, and down 13-6, after 8-1/2, the good-guys scored 8 in the bottom of the ninth for a 14-13 victory! We played 1898-rules without an umpire."

The day wrapped up with the Town Picnic, which included a pie eating contest and several tugs of war (between the boys and girls and between the men and women). 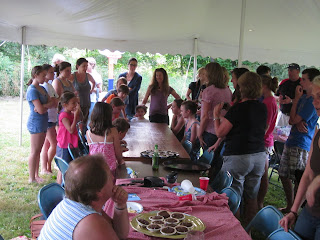 Posted by Bovina Historian at 10:00 PM