Bovina in the Civil War - The Supreme Sacrifice

Bovina officially lost eleven men in the Civil War.  The first death was that of John Sinclair Burns on April 4, 1863, age 21.  He died of that scourge that took so many soldiers – typhoid.  Typhoid was responsible for seven of Bovina’s eleven Civil War fatalities:  William T. Gillie, age 19; Robert Dysart, age 26; John Murray, Jr, age 24; Andrew G. Chisholm, age 23; Adam C. Biggar, age 23; and Solomon Coulter, age 22.  William Storie, age 22, also died of disease in 1864, though it is not known specifically what disease took him.  And an unspecified disease also took Francis Miller, who has the distinction of being Bovina’s youngest Civil War fatality.  He was 17 and may have been as young as 15 when he died. 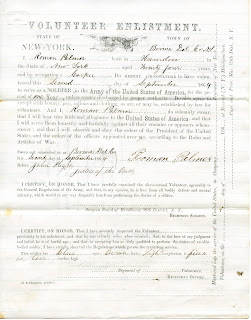 Palmer’s story is particularly poignant, for he had just settled in Bovina the year before and had been married barely five months at the time of his death. The son of Saunders and Cornelia Palmer, Roman spent his childhood in Colchester and then Hamden.  In 1860, he was living with William McLealand in Andes working as a cooper.   He decided to branch out on his own as cooper and by 1863 was in Bovina making butter firkins.  In March 1864 he bought a house in Bovina to start up a cooperage there.  That July, he brought to the house his new bride, Margaret K. Gladstone.  Two months later, he left his wife and home to enlist and was mustered into Company E of the 144th Infantry as a private (his enlistment paper is at the left - click on the image to see larger version).  On October 17, Roman signed an affidavit in Hilton Head, South Carolina, witnessed by James Adee, a Bovina native and a lieutenant in the 144th Infantry, empowering James Elliott to vote in his stead in the November 8 general election.  On December 9, 1864, Palmer was killed in action during a battle in Deveaux Neck, South Carolina and was buried near where he fell in Coosawatchie, SC.  His widow sold his home and possessions, including his cooperage tools, the following year to settle debts.  Margaret Palmer never remarried and was a widow for close to 60 years, dying in 1923.

There are three other soldiers buried or memorialized in the Bovina cemetery who died in the war.  James T. Oliver of Delhi died March 20, 1864.  Brothers Thomas and James Elliott of New Kingston both died in November 1864.  Thomas Elliott was wounded on October 19 and died in a hospital in Baltimore on November 6.  His brother James was killed at Honey Hill, North Carolina on November 30.  Thomas’s body was returned home for burial in Bovina.  On the same monument is a memorial to James, who was buried on the battlefield.

Bovina also has one Civil War soldier who was missing in action, David S. Elliott.  The son of Robert Elliott from Bovina (it is not clear how he was related to the Elliott brothers), he enlisted in Bovina in February 1864.  David was missing in action at Ream’s Station, Virginia on June 29, 1864.  Some sources say he died in Andersonville prison but this has never been verified.

Only one of Bovina’s Civil War fatalities is buried in Bovina – Sinclair Burns.  Six more have memorial stones while four of them, including Roman Palmer, have no memorial in Bovina. Bovina has a total of twenty nine Civil War soldiers buried or memorialized in Bovina Cemetery (twenty eight are in the Bovina cemetery while one veteran, Robert Halstead, who died in 1874, is buried in the Burgin Cemetery).

Note:  See the May 29, 2010 blog entry about Decoration Day, now known as Memorial Day.  Decoration day got its start after the Civil War as a way to remember those who lost their lives in the conflict.
Posted by Bovina Historian at 8:00 AM