We've had some lovely days in April for a hike to Indian Rocks (such as when I took the picture to the left - April 9 to be exact).  Unfortunately, today wasn't one of those nice April days, BUT the rain and worst of the wind held off long enough for 22 hearty souls to make the trek.  Here's who joined the hike:

Jason was noting that I appeared to be related to most of the hikers, including Lisa, Colleen and Amy, who are third cousins, and my first cousin once removed, Jillienne.  Through the Coulters, I'm related to Julie Hilson.  It's possible I'm related to Monica, though I need to sort that one out.  The Mannings appear, however, to be not related to me at all.

It was a cloudy and breezy day, but off we set and in about 40 minutes were were there.  There were a few people who had never been there.  Our youngest participant, was Finnegan Manning, while our oldest was yours truly.  We all clambered to the top to eat and enjoy the views.  On our trip back, we took a slight detour to see the other impressive rock formation that is to the left and above Indian Rocks.  We all got back before 1 and just as the first drops of rain began.

Yes, we will do this again when there is better weather.  But I was impressed with the number who did come.  Thanks all!  And thanks to Chuck McIntosh and Hope Schumejda for allowing us to hike on their land. 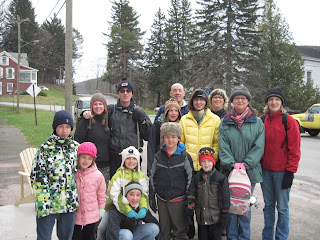 Here's the intrepid group of hikers meeting at Russells' Store to head out to Indian Rocks.  The next shot is of the whole group (minus Allison and Heleena) at Indian Rocks and is courtesy of Lisa Stanton and a conveniently positioned tree stump.  And below are other pictures from today's hike. 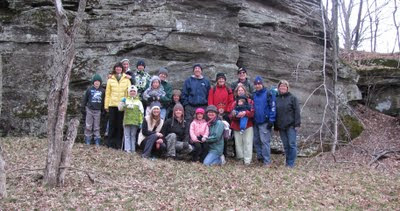 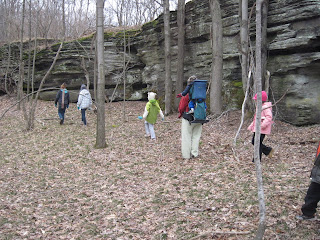 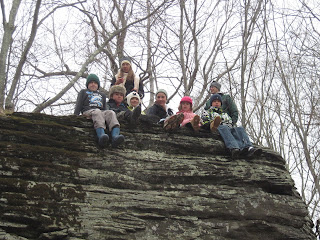 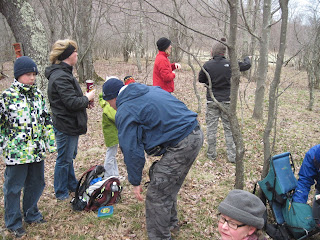 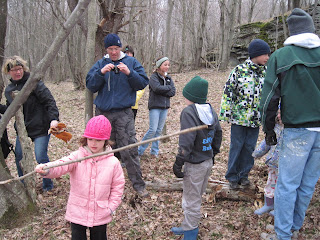 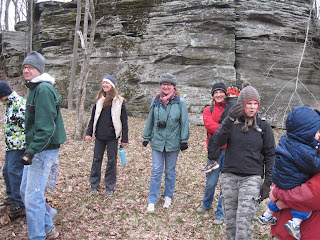 Posted by Bovina Historian at 8:52 PM