The American Civil War officially started 150 years ago today, April 12, 1861, when Confederate troops fired on Fort Sumter in Charleston harbor.  Though there was telegraph, it probably was a day or so before people in Bovina heard that their country was at war (the Bloomville Mirror reported that war had started in its April 16 issue).  What was going on in Bovina in early April 1861?

A number of families were mourning the death of young children.  Thomas and Ellen Forrest lost their two-year old son Walter on April 2.  That same day, the family of Walter and Mary Stott lost their 3 ½ year old son James George.  In the previous month, both the Forrests and Stotts had lost children, with the deaths of Elizabeth Forrest and Robert Alex Stott.  And on April 5, the Stotts lost their 13 month old son, Samuel. Walter and Mary Stott were not strangers to losing children.  Two sons died in the 1840s and in May 1864, they would lose another son when William Stott was killed in action in the war that had not yet started when his younger brothers died in 1861.  And in 1866, they lost yet another son when John died, aged 11.

The Forrests and the Stotts were not the only families in Bovina to suffer the loss of children in April 1861.  The minister for the Bovina United Presbyterian Church, Rev. J.B. Lee, lost his 13 month old son on April 17. That day, Lee attended the session meeting of the Bovina UP Church. No mention of the war (nor the loss of Reverend Lee's son)  is made in the minutes of this meeting, nor that of the meetings around this date.  Instead, they reflect a couple of cases concerning the use of intoxicating liquor - a practice forbidden in the church.

On April 15th, the Elders had planned to take up the case of Robert Archibald, who had been charged with the use of liquor, but Archibald did not appear so the case was put off.  The case was not presented and discussed until April 29 when, after much discussion, Archibald agreed to abstain from further use of liquor.  On April 17,William Bailey was admitted to membership with the proviso that he “refrain from the common use of intoxicating drinks.”  Then the session discussed the case of Mr. James Gray.  Gray had admitted to using liquor to treat a case of dysentery.  He used it “very reluctantly and only after repeated solicitations and advice.”   He claimed that this “revived an appetite [in] him so as to be unable to resist the temptation thrown in his path.”  He said he was sorry and “would hereafter be more firm in resisting any advice given to take as a medicine.”  In spite of the illness and death of his son, not only did Reverend Lee attend these meetings, but two days after the death of his son, he conducted two adult baptisms, that of Ellen Sophia Graham and Julia Ann Hoy.


While three families were in mourning for their lost children and the Bovina UP Church was tending to its usual business, the town’s fence viewers were witnessing an agreement between Henry Bramley and Ebenezer Hobbie concerning responsibility for a fence between their properties.  Hobbie agreed to build the fence and Bramley to supply the land upon which the fence would sit.  The agreement was signed April 22, 1861, ten days after the start of the war. 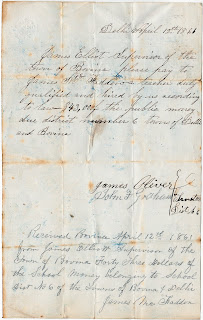 On the actual day the war started, James McFaddon was paid $43 as a teacher in the joint Bovina/Delhi School District number 6, located on Lee Hollow.  This is the receipt he signed acknowledging that he had been paid.  It is signed by two trustees of the district, James Oliver and John F. Graham, and by Mr. McFaddon, acknowledging receipt.


As with many other towns in the United States, the war that started the day James McFaddon was paid for teaching in a school on Lee Hollow would have its impact on Bovina.  Over 80 Bovina men would serve, with 11 dying in the conflict (among the dead would be the son of Bovina/Delhi District 6 trustee, James Oliver). Just as life was going on when the war started, it would continue to go on while the United States experienced the bloodiest conflict in its history.  But Bovina, and the nation, would never be the same.
Posted by Bovina Historian at 8:00 AM