On Saturday, July 18, Bovina will have a Town Picnic ... and more. Activities will include a town wide lawn sale, a breakfast to benefit the Bovina Fire Department, a lunch to benefit the Bovina Historical Society, a book sale to benefit the Bovina Public Library, a parade with floats and a baseball game featuring the Bovina Dairymen. The evening before, there will be two presentations of "The Brushland Melodrama" at the community hall. A number of Bovina organizations are involved, including the historical society, the library and the fire department, as well as the Bovina UP Church. Lots of stuff happening!

So I saw this as an opportunity to not only promote the picnic but to provide some information about past events. For this entry, I’ll focus on the picnics that took place in the late teens and for most of the 1920s. In a future entry, I will pick up with the events that took place starting in 1956.

The first Bovina town picnic (at least for which I can find any records) was 91 years ago on August 30, 1918, timed to take place after the farmers were done with their haying. Activities included a basket dinner, races for children, and a tug of war between the single and married men. The single and married men also were scheduled for a baseball game, with Lester Hoy serving as captain of the single men and Harry Robinson for the married men. The result of the tug of war was disputed and never resolved, but the married men showed their supremacy on the ball field, beating the single men 16 to 10. The town continued these picnics, often referred to as "Old Home Day," for just over a decade.

The 1919 event included in the parade veterans of the recently ended World War and Camp Fire Girls. The parade formed at the Scott arch bridge (down by the McPherson residence) and marched to the Miller orchard near the U.P.Church. That year, the single men beat the married men in baseball. The 1920 event featured a number of speakers. Assemblyman R. Long made a few remarks on true patriotism and the threat of Bolshevism, while Ernest Bergeman a New York lawyer who spent his summers in Bovina, spoke about the 19th amendment – the woman suffrage amendment – which was about to be ratified. He noted that many women in New York were able to vote in the last elections but failed to do so. He said that it was up to every woman, as well as every man, to vote. The baseball game was between the Delhi-Bloomville team and the Andes team, with Andes coming out on top. 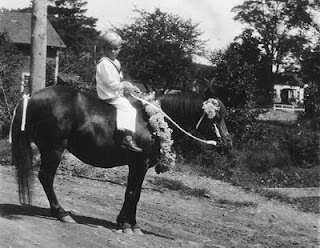 Bovina Old Home Day continued in a similar vein for several years, with parades, picnics, bands, games and speeches. The Delhi Band came to some of these and provided music during the day. Several of the picnics were held on Hoy's flat at the end of Maple Avenue. The 1926 Old Home Day parade was led by Jack Hilson on his flower decked Shetland pony (picture at left, courtesy of his daughter, Christine Hilson Batey), while his brother Alex and sister Louise followed in a flowered decked pony cart. The 1926 event also featured a ladies baseball game between the Bovina Center and Upper Bovina ladies, with having the upper hand (no pun intended).

The tradition of Old Home Day ended after 1928. In a script developed for a program on Bovina History held in 1955, it was noted that "war, automobiles, movies and the radio finally crowded out Old Home Day, much to the sorrow of many." But about a year later, attempts were made to revive it. More on that in a future installment on this blog.

Note: The main source for the above came from the Delaware Express (Delhi) newspaper.
Posted by Bovina Historian at 10:52 AM