Every once in a while, someone will alert me to a Bovina postcard. Often they end up being ones I have seen (though please never assume that - keep alerting me to cards).

But occasionally, I get an alert to a card I've never seen before. Recently, Joan Burns gave me a postcard of Bovina and wanted to know where the view on the card was located. I quickly realized that it was a generic postcard view. I have scanned 3 of these in the past decade. One of the big clues is the text that says "Greetings from Bovina Center, N.Y." or "Greetings from Bovina, N.Y." It is clear that it was simply stamped on the generic card. The text showing a genuine view of Bovina is printed on the card, not stamped.

Here's the postcard (it has a 1933 postmark) that Joan Burns gave me: 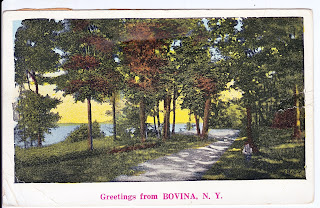 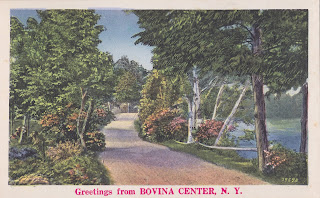 I briefly wondered if it was Bovina because it had a very slight resemblance to this view (this is County Route 6 just outside of the Bovina Center hamlet and just before you get to Russell Hill Road): 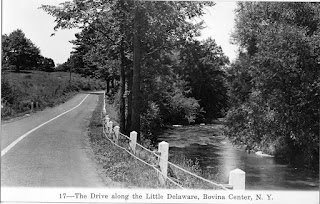 But I highly doubt the color image is from Bovina, though the merchant selling this card may have chosen the design for that reason.
And from 1929 is this view of a child with sheep, also from Chuck McIntosh. In the 19th century, Bovina had a lot of sheep but that population dropped significantly and in the 20th century there were few sheep. 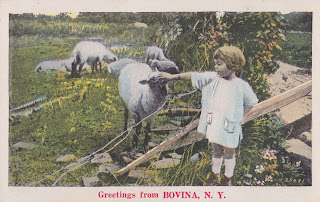 I'm always on the lookout for new postcard views of Bovina, so keep them coming!