Today (June 6) is the forty-fifth anniversary of the D-Day invasion of Nazi-occupied France by the allies. One of the soldiers in the first wave of the invasion was Carl A. Reinertsen, known as Art. He was the son of Andrew and Sophie Reinertsen. Born in Bovina in January 1919, he entered service in the Army in November 1940. In August 1942, he sailed to England and served in North Africa and Sicily, where he received the Purple Heart.

He became one of Bovina's World War II fatalities on June 7 when he was killed in action on the Normandy beaches of France. 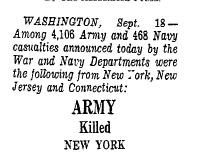 Art's death was also noted in the September 19, 1944 New York Times in it's regular listing of Casualty reports from the War and Navy Departments


A memorial service was held on July 16 at the Bovina U.P. Church. 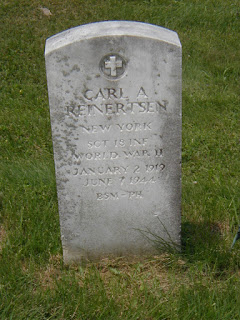 His body was brought back to the Port of New York in November 1947 and was later buried in the Bovina Cemetery. Below is the application for his headstone, provided by the U.S. government in 1948.