On August 20, 1952, Thelma Galusha married David Craig Banuat in Oneonta. Delhi photographer Bob Wyer took photographs of the wedding, including the one used in the Oneonta Daily Star, August 22, 1952 issue:

David Craig Banuat, more commonly known as Craig, was born in 1915 in Bovina, the son of Anthony and Margaret (Craig) Banuat. He grew up on the Banuat Family farm on East Bramley Mountain. At the time he married Thelma, he was working at the Fulton County Silk Mill in Gloversville. He likely met Thelma in Gloversville, where she was a teacher.

Thelma was born in Schenectady in 1919, the daughter of Leroy and Irene (Martin) Galusha. Thelma’s father died when she was eight. For a time after their father’s death, Thelma and her older brother Merl lived in the Upstate Baptist Children’s home near Oneonta while their mother worked as a maid. Thelma attended the teacher’s college in Oneonta and received her Master’s degree in 1952. She taught for several years in Union Grove, Coe Hill, Andes and in the Gloversville School system. She retired from teaching in 1953 when they moved to the Banuat family farm.

These three images below at the Banuat farm were taken by Paul Klein. Paul worked for Banuats in the 60s/70s. 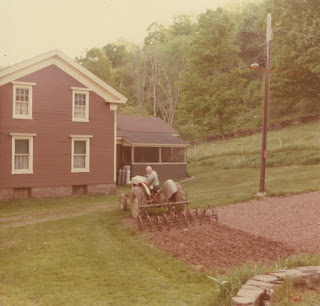 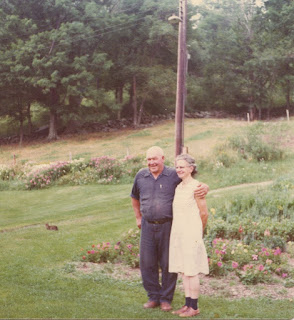 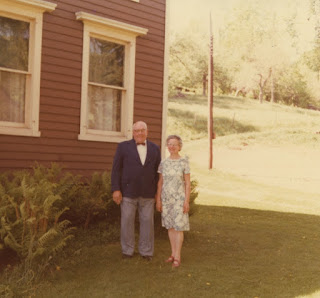 Thelma’s brother Merl tragically died in March 1972 in the crash of a Mohawk Airlines passenger plane in Albany. He was one of 17 who died in the accident. Thelma died of cancer in 1980 at the age of 60. Craig died in the summer of 1987. They both are buried in Andes near Craig’s parents and other Craig relatives.
Posted by Bovina Historian at 11:24 AM