187 years ago today, on April 1, 1830, Priscilla Brush was born, the daughter of Alexander Brush, Jr. and Jane Storie (and the granddaughter of early Bovina settler Alexander Brush). Priscilla would die at the age of 4 in 1834 and was buried in the Brush cemetery.

Seventy-three years ago today, on April 2, 1944, Elizabeth Hastings Bramley died at the age of 86. born in Bovina in 1858, she was the daughter of John Hastings and Jeanette Scott. She married William Bramley in Newburgh in 1893. She was widowed in 1923.

106 years ago today, on April 3, 1911, as later reported in the Bovina column of the Andes Recorder, "Rev. H.B. Speer and family started Monday for their new home at Omaha, Nebraska." Speer had been the pastor at the Bovina U.P. Church since 1906 and had resigned in 1911 to become pastor of a church in Omaha.

Fifty-two years ago, the April 4, 1965 Delaware Republican-Express Bovina column reported that "Mr. and Mrs. James Hoy of Bainbridge were Sunday guests of his mother, Mrs. Margaret Hoy, and son Thomas." 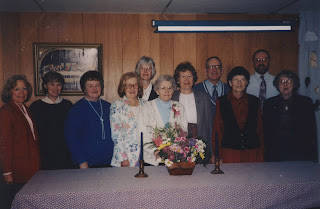 Fifty-six years ago today, on April 7, 1961, the Bovina 4-H Diary Club held its monthly meeting at the home of Frederick and Lawton Rabeler. Here's the full article in the Delaware Republican-Express for April 13. The report was submitted by Beverly Rabeler.

135 years ago today, the Bovina column of the April 11, 1882 Stamford Mirror reported that "Alex. Hoy has taken possession of the place bought by him from Wm. Richardson." This is now my house.

Ninety-eight years ago today, the April 12, 1919 Bovina column of the Delaware Republican reported that "Hale Elliott, who has been laid up several weeks with injuries received by a fall in the dry milk plant, has returned to his work there." He was born in 1890 and died in 1980. 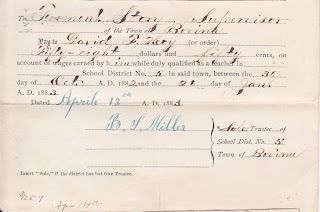 194 years ago, on April 14, 1823, days of highway work were assessed for property owners in Bovina highway district 14. Before the imposition of road taxes in the early 20th century, roads were maintained by assessing days of work on the property owners around the roads. They either had to carry out the work or hire someone to do it. Where this district was located cannot be precisely determined, but it may have been in the area of Pink Street. 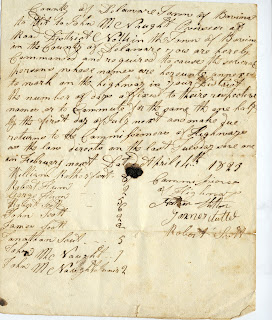 142 years ago today, on April 16, 1875, the five-year-old son of James Dean died in a tragic accident. The accident was later reported in the Delaware Gazette: "…a little son of James H. Dean, of Bovina, together with one William Herkimer, who has been at work for Mr. Dean for some time, went into the chamber of Mr. Dean's house to cut off a string from a piece of leather. While there, Herkimer was on his knees in the act of cutting the leather, when in some way the boy fell over on to the knife in Herkimer's hand. The blade of the knife penetrated the boy's left side immediately under the heart. He lived only fifteen minutes. The boy was in his 5th year." The child's first name was not provided, but I believe it was James' oldest son, Alexander.

107 years ago today, on April 17, 1910, as later reported in the Andes Recorder, "Wilson McFarland died in upper Bovina …. at 7 a.m. He was taken with lagrippe on Friday and this was complicated by heart trouble. He was born in town of Roxbury in the Plattekill valley 71 years ago April 2. When only about a year old his mother died and he was taken by his grandfather, James Thomson at the 'stone house' and had always remained there. He is survived by an aunt, Miss Lydia Thomson, one sister, Mrs. Nancy Jane Ackerly, of Margaretville, and a half-brother, Milton McFarland, of Delhi." The funeral took place on the 19th and he was buried in the Bovina cemetery.

Seventy-seven years ago today, the Bovina column in the April 18, 1940 Delaware Republican reported that "Rev. and Mrs. Norman Spear went to New Castle, Pa., Wednesday of last week; he has been called to preach there. Miss Marjorie Ormiston accompanied them, and the school in Bovina Centre is closed for a week."

163 years ago today, on April 19, 1853, Mary Jane Forrest was born in Bovina, the daughter of Thomas Forrest and Helen Raitt. She was the second wife of Edward L. Coulter, marrying in 1883. She would have two children and passed away in 1920. Her husband survived her by 12 years, dying in 1932.

136 years ago today, on April 20, 1881, as later reported in the Bovina column of the Stamford Mirror, "The household goods of the late Mrs. Kendall were sold at public auction…. Dan Franklin auctioneer." This likely is Jane Tuttle Kendall, who died in February 1881 at the age of 61. She was the daughter of William Tuttle and Sarah Carman and was married to Charles Kendall. I cannot determine when she married him. Her will file uses her maiden name with a reference to being also known as Jane Kendall.

106 years ago today, the April 21, 1911 Bovina column in the Andes Recorder reported that "Charles A. Tuttle has leased the rights of the stream flowing thru his farm to the club owning the new lake built on the Thos Mabon farm, for a year. The stream flows directly into their lake." This is now known as Coles Lake or Silver Lake and is on Route 28.

Fifty-two years ago, the April 22, 1965 Delaware Republican Express reported that "Bovina maple producers have had a poor year up to now, but the last few days they have had a splendid run of good quality syrup, which will help out a lot to bring the run up to near average."

149 years ago today, on April 23, 1868, Jane Black Murray died. She was born in Scotland in 1789, though we don't know who her parents were. She married William Murray in Scotland and would have nine children, most of whom were born in Bovina. Her husband survived her by 4 years, dying in 1872. They are both buried in the Associate Presbyterian Church cemetery on Reinertsen Hill Road.

Seventy-eight years ago today, on April 24, 1939, Ronald James Russell was born, the elder son of Ernest and Dorothy Russell. He was joined by a brother David in 1941. Ron died in 1985 at the age of 45, after battling diabetes and kidney disease. [This shot of Ron and Dorothy Russell was taken in front of what is now Bill and Joan Foster's, just down from Hilson's Store.] 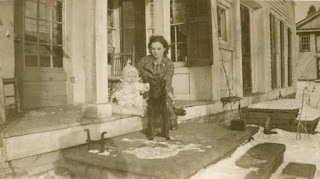 Seventy-seven years ago today, the April 25, 1940 issue of the Delaware Republican reported in its Bovina column that "Word that Mrs. C.A. McPherson is able to be up in a wheel-chair has been received from the hospital in Cooperstown." This likely was Mrs. Charles A. McPherson, born Rosa (or Rose) Strangeway in 1875. She died in December 1947. She was the mother of Frank, Lester and Marian McPherson.

137 years ago today, the April 26, 1890 Bovina column of the Delaware Republican reported that "D. Dickson is in New York this week buying goods." I'm not 100% sure who this is, but it might be a reference to Dr. Gilbert Dickson, who ran a store in the building that is now the Brushland Eating House.

138 years ago today, on April 27, 1879, Hanna Halstead died. She was born in 1801, the daughter of William Halstead. Unfortunately, we don't know a lot about her except that she was living for a number of years with her brother John. In the 1860 census, she's listed as the head of household. She is buried in the Bovina Center cemetery.

106 years ago today, the Bovina column of the April 28, 1911 Andes Recorder reported that "Jardine Hafele is home from Albany and will assist his father on the farm during the summer." This may actually be Gailie A. Hafele, the son of Charles G. Hafele and Lillian Jardine. Born in 1889, he died in 1947 and is buried in Bovina.

160 years ago today, the April 29, 1857 Delaware Gazette reported on a late snowstorm that hit "the Western and Southern States." New England was spared but apparently not New York. The Delaware County area was reported as having a "full seven feet, and some think nearer eight feet of snow ... during the two storms." There was mild weather between the two storms, allowing some of the snow to melt and settle. "Some ten or twelve barns and sheds in this village [Delhi] and vicinity were crushed in…A Mrs. Snooks, of Bovina, lost three cows and had another badly injured, by the falling of a barn." Mrs. Snooks' farm was on the lower end of Lee Hollow just above the Hook.

140 years ago today, on April 30, 1877, Jane Patterson Dysart died. Born in 1804, she married Peter Dysart and would have two children, both of whom would predecease her. Her son Robert died in October 1963 of typhoid on Folly Island in North Carolina while with the NY 144th Infantry. She lost an infant daughter in 1850. She was survived by an illegitimate grandson. More about her son Robert may be found at the December 20 2013 Bovina NY History blog. http://bovinanyhistory.blogspot.com/2013/12/illegitimate-child-of-robert-dysart.html