Bovina Band – Learn the Boys How to Blow


Karen Cuccinello from the Stamford History room found a copy of this wonderful photo of the Bovina Cornet Band (c. 1890) that I originally shared on this blog in November 2010. When I wrote that entry, I did not know the names of the band members.  Unlike the copy held by the Bovina Historical Society, this one shared by Karen had the names on the back! They are, left to right: James Foreman, John Laing, James Dickson, Millard Thomson, Al McPherson, George McNair, Will Miller, Robert Fiero, Adam Laidlaw, Robert Foreman, John Gordon, Fred Bramley, William Archibald, Will Black, Arthur Hoy, Dr. Secord (vet), Alex Myers. 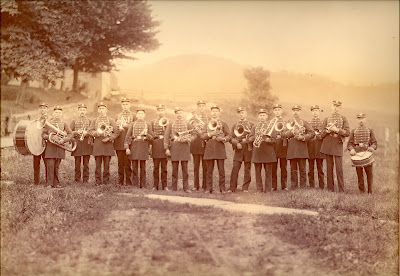 The photo held by the Bovina Historical Society was donated by Margaret Hoy. Her father was Adam Laidlaw, one of the band members. The copy shared by Karen was owned by Emily Archibald. Her father too was a band member, William Archibald.

The May 17, 1890 Delaware Republican reported the band’s formation under the headline “B.B.B. – Bovina Brass Band” and noted that “when fully organized [the band] will contain about twenty pieces.” The report went on to say that “a teacher has been engaged to learn the boys how to blow.” The band received its instruction from Mr. M.V. Teller, of Stamford. On August 16, the Delaware Republican reported who was in the band, now called the Bovina Coronet Band: 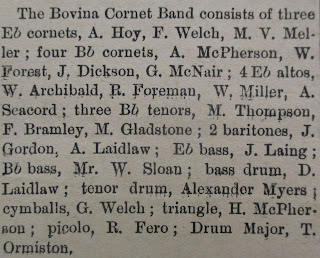 You’ll notice that there are some names not in the photo, as well as two names in the photo that are not in this article.

The August 20, 1890 Delaware Gazette reported that the band “serenaded some of the prominent citizens of the town, and among them Mr. and Mrs. A.F. Maynard.” The Maynards invited the band into their home and served refreshments and presented them a $20 donation.

The band took some time to get underway. In the October 18 Delaware Republican, it was reported that “the band have postponed their concert till about Christmas.” The paper went on to note that “our neighboring towns are commencing to realize the fact that we have a band and you can spell it with a big B every time.”

In December, the band did indeed give a concert on Christmas Eve at Strangeway’s Hall. The Delaware Republican on December 6 promoted this concert, noting that “this entertainment will give an evening or two of pleasure to those who may attend it, as an entertainment of this kind ... will be well worth hearing.”

During the 1890s, the band entertained in Bovina and in the surrounding area. They went to Hancock on August 1891 for the Grand Army of the Republic Reunion. In August 1894, the band played for a picnic in New Kingston and in Shavertown at the fair there in 1896. They performed at a benefit in Bloomville in September 1896 as a benefit for a band being formed there. Sixteen members of the Bovina band marched in the 1897 Delaware County Centennial Parade in Delhi.

Of course, they also played in Bovina. Reported in the Andes Recorder in 1895, the band performed for Bovina’s Decoration Day “under the direction of Professor Harkness and assisted by a snare drummer from Margaretville.” In 1896, the Recorder reported that in September “the Bovina Band has purchased a gasoline lamp, and tested it at a recent practice meeting.  It gives a fine light.”

The band didn’t always perform for just public events. In December 1898, the band serenaded Milton Hoy when he returned home from his service in the Spanish-American War.

Sadly, M.V. Teller, who gave the band instruction when it was founded, was sent to the Binghamton asylum in 1899.

It is not clear when the band disbanded, but references to its activities disappear from the local press by the early 1900s.

Here’s a bit more information on the people in this photo (in order from left to right):

James Foreman was born in Bovina in 1871, the son of Archibald Foreman and Davina Laidlaw. Married to Jennett Archibald in 1900, he died in 1949. A fellow band member was his first cousin Adam Laidlaw.


John Laing was a grandson of the Andes pastor Rev. James Laing. Born in Andes in 1867, he married Mary Alice Elliott in 1892. She died the following year giving birth to a son. He remarried and eventually settled in the Binghamton area, dying in 1940. His sister Isabella was married to fellow band member Alex Myers.

James Dickson was born in 1866, the son of Michael Dickson and nephew of Gilbert Dickson, who built the structure that is now the Brushland Eating House. He married Lavonia Dumond in Albany in 1921. He lived in Oneonta for a number of years working as a druggist. He died in the late 1930s or early 1940s.

Millard Thomson was born in 1870, the son of Andrew Thomson and Margaret Scott. Married to Agnes Bright, he was the father of J. Marshall Thomson, who later married Helen Blair. Millard died in 1913.

Al McPherson probably is Albert McPherson, the son of Alexander McPherson. Born in 1840, he married Drusilla Ellsworth in 1872. He is the grandfather of former Bovina supervisor Frank McPherson. Albert died in 1917.

George McNair was born in Shavertown in 1872. He married Mame Liddle in 1900. George was a funeral director for 36 years in Andes. He was the Andes Town Clerk for 10 years and later served as the Andes Town Supervisor from 1933-1945. He was the last surviving member of the Bovina band, dying in 1955.

Robert Fiero came from the Margaretville area, born in 1861. He married Christiana Forrest in 1880 and lived in Bovina, working for Hilson Brothers and later at the Dry Milk plant at the Bovina creamery. He moved to Bainbridge in the 1920s and died there in 1935.

Adam Laidlaw was born in Delhi in 1871, the son of George Laidlaw and Jane Hume. He married Emma Campbell in 1902 and was the father of two daughters, including Margaret, who married James Hoy and was the Bovina Town Clerk for many years. Adam died in 1935. Fellow band member James Foreman was Adam’s first cousin.

Robert Foreman was born in 1869, son of Archibald and Davina Foreman and older brother of fellow band member James Foreman. Robert was married to Dora Alice Boggs in 1900. Robert died in 1944.

John L. Gordon was the son of Thomas Gordon and his first wife, Mary Jane Oliver. Born in 1871, he married Elizabeth Roger. He became a New York City policeman and committed suicide in 1908 (see May 23, 2014 blog entry for more about John - http://bovinanyhistory.blogspot.com/2014/05/stories-from-bovina-cemeteries.html).

Frederick H. Bramley was born in Bovina in 1868, the son of John W. Bramley and Margaret McCune. He was married three times, surviving all three wives and dying in 1944. He was first cousin to fellow band member William T. Miller.

William Archibald was born in 1870, the son of George Archibald and Jane Anderson. He married Sarah Hobbie in 1897. They would have three daughters. William died in Bovina in 1941.

Will Black probably is William T. Black. Born in Wisconsin in 1861, he grew up in Bovina and was Bovina Town Supervisor for four terms before moving to Delhi when he became the County Clerk. His wife was Bell Black, who was Isabell Russell’s aunt. Will and Belle both died in 1938.

Arthur D. Hoy was the son of Thomas Hoy and Julia Ann Tuttle. Born in Bovina in 1872, he married Janet Currie and would have two sons. Arthur died in 1924 in Bovina.

Dr. Andrew Secord was born in Bovina in 1872, the son of Edward Seacord and Mary Peake. He married Elizabeth Loughran in 1894. He became a veterinarian in 1895, starting up his business in Bovina. When he died in 1913, he was living in Atlanta, where he had moved to around 1902.

Alexander R. Myers was born in 1856 in Delhi. He married Isabella Laing in 1879 and died in 1947. He was brother-in-law to fellow band member John Laing.