When one thinks of Christmas in Bovina, the usual thought probably starts with snow (though our more recent Christmases often have been green) and then goes back to the traditions of celebrating since the first settlers came.

Bovina’s early settlers, however, likely did not do much celebrating. Celebrations of Christmas before the Civil War were scattered and appear not to have been very common. Not all areas of the country felt it appropriate. During the colonial period, some groups did not celebrate at all. The Puritans at one point outlawed it and even when that law was repealed celebrations in New England were discouraged into the 19th century. This contrasted with the south, where the English tradition of Christmas celebrations were more common.

Given that New York and Bovina were between New England and the South, traditions for celebrating likely varied. Though many of Bovina’s early settlers came from Scotland, there were settlers who may have been impacted by their New England heritage. And a number of the early Scots settlers would have had religious beliefs that started through John Calvin, who was a big influence on the Puritans. So it is likely that before the Civil War Christmas was not celebrated in any significant way.

And while religious beliefs may have driven this, a simpler explanation may simply be the lack of funds and time. To some, it was simply another day to do the chores and whatever else was needed to ensure they would make it to another spring.

It seems that people in urban areas did more with the holiday. In an article from the Cooperstown based Freeman’s Journal from January 1830, information about Santa Claus is provided, noting that “Many of our country readers are unacquainted with a custom which generally prevails in this city.”

In reviewing what Bovina records I could on the subject, it is often conspicuous by its absence. While absence doesn’t necessarily mean the holiday was ignored, it seems likely that it probably wasn’t much more than a date on the calendar. The Bovina UP Church Session minutes in the 19th century make no mention of Christmas at all. The church’s session its regular meeting on December 25, 1886 with no mention of the holiday.

During Bovina resident William Richardson’s time in the 144th Regiment of the New York Volunteer Infantry during the Civil War, he observed three Christmases away from home. Two of these are documented in his diary. He was in St. Augustine, Florida for Christmas in 1863. He noted, somewhat detachedly, that “there is no work going on today they are all holding Christmas.” Whether he was ‘holding Christmas’ too is not clear, but it appears likely he did not, indicating that it was not something he did when in Bovina. His Christmas in 1864 came while the 144th was recovering from a major battle in South Carolina. His diary entry makes no mention of the holiday, though he notes that several went “went to the Catholic Church.”

Walter Coulter’s diary for December 25, 1868, when he still was living in Bovina (he settled a couple of years later in Walton), makes some mention of Christmas, noting that it “has passed off very quietly around here.” That day, he did chores and drew logs out of the woods. No reference was made to any kind of family gathering.

Alexander Storie kept a diary from the 1870s into the late 1890s. His mention of the holiday is inconsistent. He recorded on Christmas day in 1874 that the boys (likely meaning some of his sons) “went to the festival at Brushland in the evening.” I am assuming the festival was somehow related to the holiday (by 1870, Christmas had become a federal holiday).

His 1881 diary does not mention Christmas on December 25th at all and provides no other hints that it was anything other than an ordinary day, but two days earlier, he mentioned someone in his house, Kate, going to a “Christmas tree” in Brushland. A Christmas tree was a term used for some time into the 20th century, denoting a community Christmas party. Newspapers started reporting these almost annual Christmas programs in Bovina (and other communities). Usually held at a church, school or at Strangeway’s Hall, these programs were geared toward the children. They would include an actual tree, presents and ‘exercises’ by the children. In the late 19th and early 20th centuries, many of the presents were supplied by the Gerry family. Variations of these programs continued into the 20th century.

In a rudimentary diary I kept briefly in 1966, I recorded going to a Christmas tree on December 22:

There were other kinds of celebrations of Christmas in Bovina in the 20th century. This is an ad from the 1944 Catskill Mountain news. The Melody Boys were a noted local band that included the well known fiddler and square dance caller Hilt Kelly, who was 18 at the time of this particular dance: 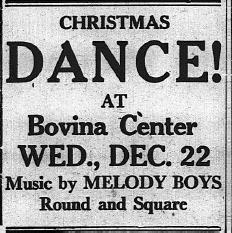