"Performance of one of Ballou's Patent Threshing Machines"

A notice dated February 7, 1825, appeared in the Delaware Gazette concerning mechanical progress made in threshing. Here's the text of the notice:

We, the subscribers, certify that we have this day viewed the performance of one of BALLOU's Patent Threshing Machines, erected in the barn of Mr. David Thompson, in the town of Bovina, in the County of Delaware, and that the said Machine, in our presence, threshed thirty six sheaves of Rye in seven minutes; and also the same number of sheaves of Wheat in the same length of time when turned by a two horse power; and that the grain was threshed cleaner from the straw, and more perfectly separated from the chaff, than is done by any mode of threshing with which we are acquainted. We further more certify, that one man and two boys performed all the labour in attending the Machine and removing the straw.

The Patent Right for making the above Machine, is offered for sale by the subscribers residing in the town of Bovina.

The Cost of the Machines will be from 30 to 40 dollars. 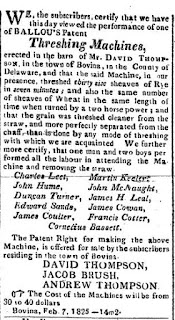 This ad ran almost weekly for over two months. This machine was invented in 1821 by Seth Ballou from Livermore, Maine. It saw several patented improvements in a few years.

David Thompson was born in Scotland in 1780 and came to the United States as a young man, coming to Bovina it is believed around the War of 1812. He was married twice and died at the age of 51 in 1832. The farm appears to have been in the vicinity of what is now Reinertsen Hill Road when it went all the way to Jim Lane Road. Andrew Thompson (1778-1866) was David's brother. Jacob Brush was the son of Alexander Brush, one of Bovina's earliest settlers. Born on Long Island, he left Bovina sometime after this demonstration and was in Wayne County, New York at his early death in 1835.

Some of the gentlemen watching were likely neighbors or relatives (or both). James Coulter was the brother in law of Jacob Brush. Francis Coulter (no relation to the aforementioned James) was an early Bovina settler who had his farm on what is now Coulter Brook Road. John McNaught likely was the McNaught from the McNaught Hill area of Bovina, not far from David Thompson. James Cowan may be the James, born 1794, who married the daughter of another Bovina early settler, Elisha Maynard. John Hume and Charles Leet show up in early Bovina tax rolls but are gone by the end of the 1820s. James Leal likely is the Dr. Leal who was one of Bovina's first doctors. He lived on the Stamford/Bovina town line until his death in 1831. Several of the men were not from Bovina. Martin Keeler was from the Town of Kortright (where he was town supervisor in 1820), Duncan Turner was from Stamford, and Cornelius Bassett and Edward Sands were both from Andes.