This Day in Bovina for May

Sixty years ago, on May 1, 1955, Marshall Thomson resigned his position in the Bovina creamery. Marvin Archibald took over his job.

Fifty four years ago today, on May 2, 1961, the annual meeting of the trustees of the Bovina School District number 4 was held. The trustees voted to close the village school after the school year and send all pupils to adjoining central schools.

125 years ago today, the May 3, 1890 Stamford Mirror in its Bovina column reported that "a case of scarlet fever was reported to the Board of Health last week and the family of William B. Lull was placed under quarantine, but fortunately it turned out to be only a scarlet rash."

152 years ago today, on May 4, 1863, Edward O'Connor, one of the major figures of the Anti-Rent War, died in Michigan, five years, almost to the day, after his wife Janet's death. For more information on O'Connor, read the Bovina NY History blog at http://bovinanyhistory.blogspot.com/2013/05/stories-from-bovinas-cemeteries-what.html and http://bovinanyhistory.blogspot.com/2013/07/i-did-for-friends-and-liberty-jailhouse.html

Fifty four years ago today, as later reported in the Delaware Republican Express - "The meeting of the Bovina 4-H Dairy Club was held in the home of Ricahrd Damgaard on May 5, 1961. We discussed the Delhi Dairy Festival and preparing and the showing of our cattle at the Festival. We also iscussed how our cattle were growing. Our next meeting will not be held in June. Beverly Rabeler, reporter."

The May 6, 1887 Bovina column of the Stamford Mirror had this fairly long item: "The Bovina correspondent's items in the Andes Recorder of April 27, would give people the impression that some of our citizens are becoming somewhat demoralized. After describing a party at Mr. McCune's, he asks 'Who was drunk?' A young man return from the party, slipped or stumbled as he was going up the steps of his employers house, and in trying to save himself from failing threw out his hands and struck a paine of glass and broke it; but no one supposed he was drunk, until the Recorder correspondent made the discovery. He also states as a fact that 'one of our prohibition brethren treats his friends with alcohol.' A few weeks ago, a stranger came along and engaged to work during the summer for one of our farmers. Upon a pretense that one of the horses was sick, he succeeded in getting some alcohol from parties in Bovina Centre, and soon afterwards was found intoxicated. In trying to give an excuse for being in this condition, he said a certain young man (a prohibitionist) came along where he was at work, and offered him a drink, and he took too much. People here looked up it as a 'good joke' on the prohibitionist, but knew better than to believe the story, as his character is above suspicion."

126 years ago today, the May 7, 1889 Stamford Mirror reported that "While Russell McFarland, of Bovina, was working at getting out a large stone the other day the lever slipped from his hand, striking him on the ear, causing a severe concussion of the brain, and he sustained other injuries to such an extent that he is confined to his bed and is under the doctor's care." This likely was Thomas Russell McFarland. Born in 1845, he survived this accident and died in 1915.

120 years ago, on May 8, 1895, as later reported in the Andes Recorder Bovina column, "James S. Gill of Margaretville was in town with a Scotch Granit monument which was placed in the new cemetery to the memory of his father and mother." Here's the monument (photo by Ed and Dick Davidson). 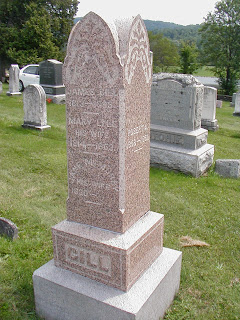 Eighty-five years ago today, the May 9, 1930 issue of the Delaware Express reported that "David Draffen is confined to his bed with heart trouble." David and his wife, the former Agnes Burns, lived on what is now known as the Bindler place up Crescent Valley. David lived over another decade, dying in 1942. David and Aggie were my dad's great uncle and aunt.

200 years ago today, on May 10, 1815, the Associate Presbyterian Church of the Little Delaware erected its first church building at the foot of what is now Reinertsen Hill Road. The building was used for 34 years. Thirty six feet by thirty feet with a gallery, it didn't have pews and a pulpit until 1824, making do with rough boards and blocks for seating and a carpenters bench for a pulpit. A cemetery grew up around the church building during and after its use. The congregation moved into the Bovina Center hamlet to its new church in 1849. The original building was dismantled in the 1850s and given to the Presbyterian Church in Delancey, where it stood until a fire destroyed it in 1896.

Sixty four years ago today, the May 11, 1951 issue of the Catskill Mountain News reported on new books at the Bovina Public Library. Titles included Dusty and His Friends; Rocket Shop to Mars', Johnny Appleseed; Care and Training of Husbands; Squirrely of Willow Hill; Body, Boots and Britches (this was a book of 'Folktales, Ballads and Seech from Country New York, written in 1939); Lou Gehrig; The Story of Lassie; and Anne of Green Gables.

Sixty two years ago today, on May 12, 1953, Mrs. Ida McCune died in Binghamton following an operation. She was 82. She was born in 1870 and spent most of her life in Bovina. The daughter of Peter and Elizabeth NcNair, she married John McCune in 1896 and was widowed in 1942. Among her many community activities while in Bovina, she served for a number of years as the librarian at the Bovina Public Library. Her obituary in the May 22, 1953 Catskill Mountain News was entitled "Ida McCune Dies After Life of Good Deeds."

Fifty four years ago today, on May 13, 1961, as later reported in the Delaware Republican Express, "Mrs. Ray Jardine and daughter, Marian went to Brockport...where they visited Martha who is attending College there." The paper noted that they returned to Bovina the next evening.

Twenty seven years ago today, May 14, 1988, Martena Monroe Kellam passed away. Born in 1898, she was the daughter of James Monroe and Margaret S. Coulter. She married Arthur Kellam in 1926. Arthur died in 1975. Martena is buried in the Bovina cemetery.

112 years ago, the May 15, 1903 Bovina column of the Andes Recorder reported that "The water in the streams is very low."

119 years ago today, on May 16, 1896, as later reported in the Andes Recorder Bovina column, "Mr. Muller was taken with a poor spell Saturday, but is again in about his usual health which is very poor." This was Jost Urban Müller. He died in August 1897. More information about Muller and his family can be see at the Bovina NY History blog at http://bovinanyhistory.blogspot.com/2013/01/stories-from-bovina-cemeteries-muller.html.

112 years ago today, May 17, 1903, Margaret Isabel Doig was born in Bovina, the daughter of Robert W. Doig and Isabelle King. She married Jesse Nichols in December 1933 as his second wife. She was a school teacher in Walton for 44 years. Widowed in 1946, Margaret would live to be almost 100, dying in August 2002. She is buried in the Bovina Cemetery near her parents.

121 years ago, the May 18, 1894 Bovina column of the Andes Recorder reported that "Some of our dairymen have commenced packing their butter in firkins."

Ninety-three years ago today, the May 19, 1922 Andes Recorder in its Bovina column reported that "John R. Aitkins has purchases a new Durant car." In the same column, it was also reported that Clarence LaFever has traded his motorcycle with Sheffield Smith for a Ford car." Clarence was the brother of Benson LaFever.

115 years ago today, on May 20, 1900, David F. Hoy, registrar, of Cornell University, and wife were at John R. Hoy’s over Sabbath. More about David Hoy can be seen on the Bovina NY History blog at http://bovinanyhistory.blogspot.com/2014/10/david-fletcher-hoy-give-my-regards-to.html.

106 years ago today, the May 21, 1909 Bovina column of the Andes Recorder reported that "thus far this year only 15 hunting licences have been issued in town."

116 years ago today, as later reported in the Andes Recorder, "Monday morning (May 22, 1899) David Sloan took the early train from Delhi to return to his home in Crested Butte, Colorado."

137 years ago today, on May 23, 1878, as later reported by the Lake Delaware correspondent of the Andes Recorder, "…Robert L. Livingston, Esq., and family, arrived at their pleasant summer home at Lake Delaware." The recorder went on to note the arrival of "Mr. Gerry, accompanied by his family, and servants"  a couple of days later, noting that they "came by special train from Rondout to Dean’s, making but one stop, in less than two hours." The paper expressed the hope "that their stay this season may be among the most pleasant of those they have enjoyed."

120 years ago today, on May 24, 1895, as later reported in the Andes Recorder, "the remains of Mrs. Walter Forrest were brought here for interment last Friday. She resided in this town in her younger days." Mrs. Forrest was born Margaret Telford in 1815. Married to Walter Forrest in 1839, she had four children and was widowed in 1878.

134 years ago today, as later reported in the Stamford Mirror, "A terrific hail storm visited this section Wednesday afternoon (May 25, 1881), breaking window glass, and cutting up vegetation generally."

117 years ago today, the May 27, 1898 Bovina column of the Andes Recorder reported that "The usual Memorial Day exercises will not be held here this year, owing to the fact that no appropriation was made and there is no funds." The following week's column reported that "while the usual Memorial Day exercises were not observed…the graves of the fallen heroes were marked with the flag they loved so well and strewed with the sweet flowers of nature."

116 years ago today, on May 28, 1899, as later reported in the Bovina column of the Andes Recorder, "Thomas H. Luddington, one of the oldest residents of this town, died…with a complication of diseases, and was aged about 75 years, and has always been a resident of the town, living until after the death of his wife a few years ago, on the old homestead above the Hook, but has been a resident of this village for a short time.  The funeral was held Wednesday, Rev. H.F. Brown officiating."

132 years ago today, the Bovina column of the May 29, 1883 issue of the Stamford Mirror reported that "Andrew Strangeway has put up a street lamp at his store, which sheds it effulgence all around."

Seventy five years ago today, the May 30, 1940 Bovina Column in the Delaware Republican reported that "Maurice Hall is ill at present writing with a bad cold. A number of our people are affected with colds." Maurice Hall would recover and live until 1974. He was 78 at the time of his death.

133 years ago today, May 31, 1882, Miss Elizabeth McFarland died at the residence of her mother. The funeral was held June 2d. She was the daughter of Andrew McFarland and Jane Russell McFarland. She is buried in the Bovina Cemetery. Here is her headstone (photo by Ed and Dick Davidson). 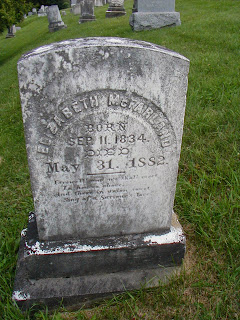