One hundred and forty six years ago today, on November 2, 1868, Alice Russell penned this letter to her mother in New Kingston. Alice was working for the Black family in Brushland.

This letter was addressed to Mrs. John G. Russell, New Kingston, Delaware County, written by her daughter Alice Jane Russell. Alice was born in 1847, the daughter of John Grant Russell (1822-1902) and Jane Chisholm (1815-1886). When Alice wrote this letter, she was living with the Black family. This likely was Mr. and Mrs. David Black. David Black was born in Scotland in 1824 and died in 1883. Mrs. Black was Mary Jane Scott (1833-1889). The Black farm was located on Coulter Brook Road. It was where Isabell Irvine Russell lived and was married. The farm later became the Elms Farm, owned and run by Cliff and Gert Hall. Many thanks to my cousin Barbara Boggs Ide for sharing this letter from her great grandmother. (An image of the letter is at the end of this blog entry.)

As I happened to be thinking about home to day I thought I would write you a few lines to let you know that I am well and hope this will find you well and able to eat a good fat piece of pork, along with some potatoes. I am still at work. I have got to stay until the (13th) of the present month before my time is out. Mrs. Black says she does not know whether she can get along without me then or not. The cows give very little this cold weather they sold their hogs alive. They only kept one for their own use, so the butchering will not be very much. I am cleaning house this week, done an old staving(?) washing to day. I have got me a new pair of shoes they were two dollars pretty good ones for store shoes.

I have got me a new Jockey which cost me the immense sum of (ninety cents) I am nearly broke. If you have any claims against the firm you had better collect them at once.

I hope you have got your spinning done. You must recollect I want some stocking tumber this winter. I have had none for two winters past. I want one pair white single cross banded and two pair of every day ones. I am pretty near out. It may look like a good bunch to call on at once but I have not had an in so long I have to do something.

I supose you have made lots of butter (that is for yourself) don’t pinch us all winter because you can call it your own we need about one tub to last us through desently [decently].

Blacks sold their dairy for (43 cts per pound). It is getting towards bedtime and I must think of stopping. My love to Father, you with a share for the rest.

Did you hear Jim Coulter had bought a farm the one old Marrie Scott used to own. The[y] say he is to be married to a girl by the name of Libbie Mable.

Alice would marry William Boggs in February 1871 and settle in Bovina where she would have two sons, Harry Grant Boggs, who died at the age of 18 in 1891 and J. Russell Boggs, who would die in 1955 at the age of 76. Alice died in June 1923, predeceasing her husband by 10 years.

As to the possible marriage of James Coulter to Libbie Mable, I have been unable to find that it actually took place. There is a James Coulter who married Mary Rotermund in December 1868 in Andes. Whether or not this is the same James is hard to determine, but he is the closest fit in terms of age. Ironically, James and Mary's daughter Margaret would marry Alice's son J.R. Boggs. 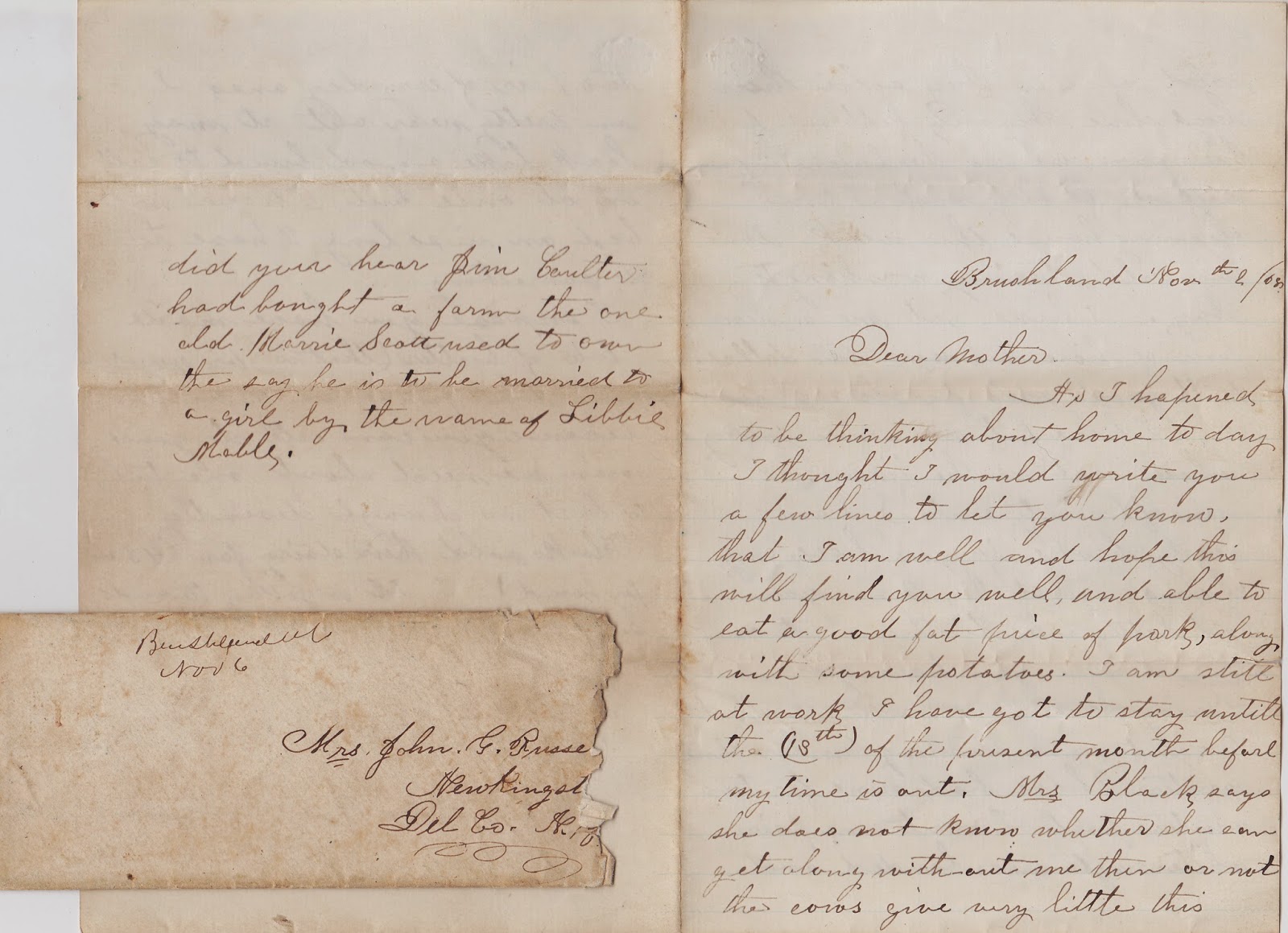 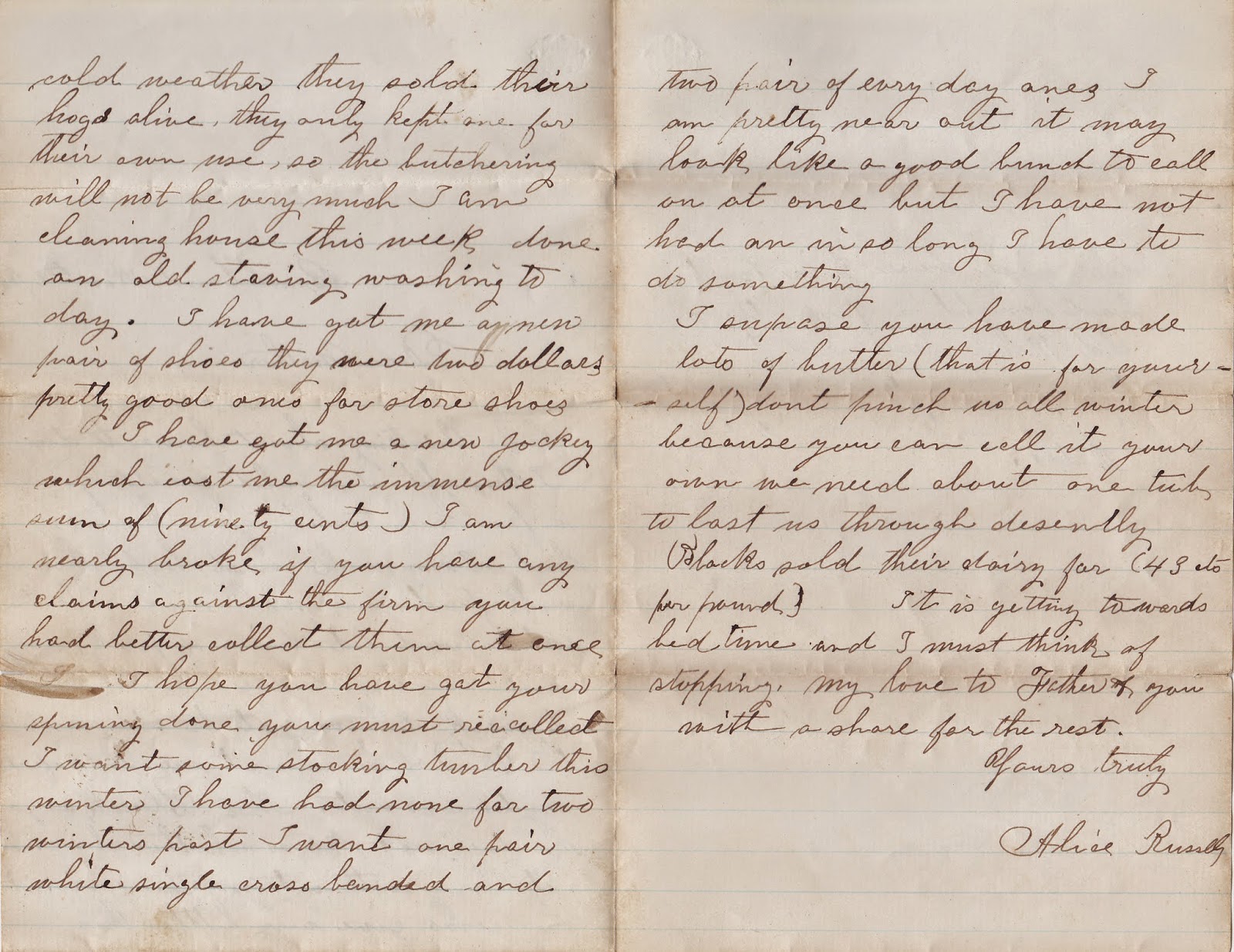