Pinpointing the Past - The Moon Mountain Plane Crash

Readers of this blog will have read past entries from 2011 (April 29, May 30, June 1, and October 16) concerning a plane crash in the Bramley Mountain area of Bovina in April 1945. Though I haven't written about it in some time, I have continued efforts with filmmaker Chris Ingvordsen to locate some of the wreckage and had some success last fall in finally locating something, thanks to Bovina resident (and SUNY Geneseo student) Samantha Misa.

Because of her continuing interest in the crash and the fact that her grandfather was in World War II, part of the 100th Bomber Group flying missions in Europe, she joined The 8th Air Force Historical Society. When she put her age down as 18, staff from the society actually contacted her to confirm that this was the right age - they weren't used to 18 year olds joining the society. This started an e-mail conversation between Samantha and the editor of the society's magazine - essentially an interview about her grandfather and about the search for wreckage from the Moon Mountain crash. Her e-mail became an article in the society's June 2014 magazine, somewhat to Samantha's surprise. The article included some photos, some of which have been presented in this blog before. I am including a photo of Samantha in her 'detecting gear' and a photo I took of the pieces she helped us locate that are believed to come from the crash. 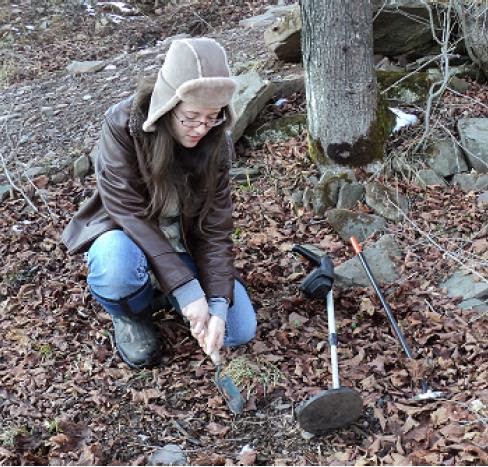 Pinpointing the Past: A Promising Life Cut Short by Samantha Misa

I am 18 years old, and I’ve always had a great interest in and love for history. I’m not quite sure where it comes from. Maybe it’s because my grandfather fought in WWII. My grandfather was Edward C. Rogers, a T/Sgt and top turret engineer on the B17 King Bee. He was part of the 100th Bomb Group during the war, and he and his crew flew 35 missions, 6 of which were to Berlin.

I learned this through research and family paperwork that I found. My grandfather, although alive for most of my life, died before I was mature enough to develop an interest in the past and ask him myself of his experiences during this amazing, interesting, and extremely important part of history. I will never forgive myself for not having talked to him when I had the chance.

At the end of high school, after working at a museum for the summer, I was told of a WWII plane crash that had happened in 1945 a block away from my house. I live in Bovina, a small farming community in upstate New York. The Bovina town historian, Ray LaFever, works with me at the local museum, the Delaware County Historical Association. LaFever, along with some other locals, had made a few expeditions to the spot in town where the plane went down. The army had been called once the crash happened, and most of the wreckage hauled away, but they went up trying to find the exact spot where it happened. No one seems to know the exact location, but it is known that the plane went down on what is called Moon Mountain.

The pilot was Robert Bragg Clark, who was flying an AT6 Texan trainer. He had left Bolling Field, Washington and was on a training trip to Stewart Field in Newburgh. It was 9 PM on April 29, 1945, and the weather conditions were getting progressively worse. There were showers and clouds at 3,000 feet. Around midnight, Clark, who barely had an hour of experience flying on instruments, realized that he had passed his target and began to circle the area known as Moon Mountain. According to the records, Clark, who was flying below the clouds at this time, got too low and his plane’s left wing struck a tree. The plane crashed into the east side of the mountain. Early the next morning, the wreckage of the plane was found. Clark had been killed instantly, and human error was ruled to be the cause of the accident.

Although the site soon was put under guard, it did not stop the townspeople from coming to see what had happened. The debris field was so large that not all of it could be watched. A 43 pound engine piece was taken away as a souvenir by a local man. Even groups of school children were brought up to the mountain to gawk at the crash site.

Robert Clark was a young man who was full of promise. He had been the class valedictorian, and was a member of the National Honor Society. Clark won state recognition for his debating talents, and had been appointed to the United States Military Academy at West Point by a Nebraska state senator. At the time of his death, Clark had almost gained enough flying hours to earn his wings. What makes his achievements all the more remarkable is that, when he was in high school, his parents divorced. They later remarried other people, but his mother would later commit suicide. To me, the saddest part of all was the the war was nearing its end, and Clark would not live to see its completion.

As I mentioned, there had been a few previous expeditions to Moon Mountain to attempt to locate the exact crash site and maybe find some debris. Treks up the mountain had so far been unsuccessful. Moon Mountain is 2,665 feet high, and the altimeter from Clark’s plane read 2,460 feet at the time of the crash. Using GPS technology, the right altitude was found, but the area was still too broad to do any real searching. The debris field was estimated to be 300 feet around from the actual impact, so we had a lot of ground to cover. In an effort to make our task easier, I brought out my trusty metal detector and swept the area. Along with historian Ray LaFever, I was joined by the property owner Donald Farley and videographer Chris Ingvordsen, who was there to document our search.

It was a cold, bitter fall day when we set out. I began sweeping the entire area, letting the guys point me in any direction they thought might be significant. The metal detector was silent. The landscape was peaceful and undisturbed. There had been many “ear” witnesses to the crash, people who had heard it but had not seen it. Some people remembered that they could see the wreckage from certain sides of the mountain, but these reports contradicted each other. One local claimed that he remembered playing in a cave that was on the mountain near where the crash had happened. We figured it was worth sweeping around any area that had been in these descriptions.

There was a cave on the property, and we eventually found it. I swept the area with the metal detector, and, for the first time since I had turned it on during that expedition, I got a hit. Cameras rolling, we gently moved the dead leaves and dirt away from the spot, carefully, until we unearthed something out of the ordinary: A pile of cut wires. More than 20 of them were found in the spot, all of them different lengths. Many had performed ends, some U shaped or circular. We know that they are steel, because the smaller pieces were picked up with a powerful magnet. Many were smooth and unbent, leading to the conclusion that we had found something that was not barbed wire or discarded farm refuse.

We sent photos of our findings to an aviation expert who reported back that he believed that they came from the plane. This was part of his report: “Control cables would be of steel or stainless steel. Main control cables would probably be 3/16" or 1/4". Trim tab cables would probably be 1/8"electrical wire ends that would connect to a terminal, a #8 or #10 machine screw. Generally, there would be a predrilled connector crimped on the end of the wire, but with war time production, the end may have been flattened, soldered and then drilled. The "U" shaped end may just be the wire untwisted, or if drilled, could be a control cable end that would be connected to a bellcrank with a pin.” At the end, he added “I would say you have pinpointed the crash site. Good work.” And that made it all worth it. 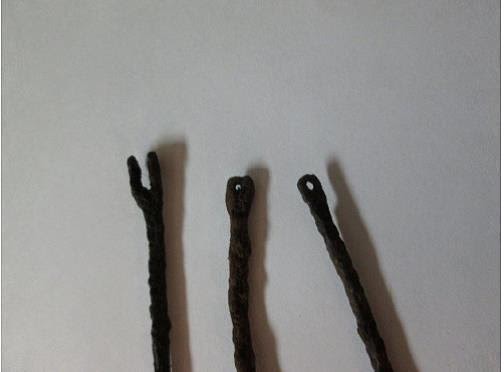 Even though Robert Clark did not die in combat, he was still a young man who gave his life for his country, and anyone who has done that has not died in vain. Clark’s death also embodies the sacrifices made by those on the home front, those who were not in combat but still gave so much. So maybe that’s why I love history so much; it gives me the opportunity to record andpreserve things like this for the people that didn’t leave anyone behind to do it for them.

I would not have known any of this if it were not for the help of Bovina Town Historian Ray LaFever, who knew the intimate details of the crash and where to start looking. It’s probably thanks to his efforts that material on this event are still around. We plan on making another trip to Moon Mountain this spring of 2014.
Posted by Bovina Historian at 7:07 PM