On a late October day in 1848, Thomas Landon, a 30 year old shoemaker living in Bovina Center, discovered that a thief had 'feloniously taken from his garden' two heads of cabbage. He suspected his neighbor, John Reid, a 50 year old local tailor, of being the culprit. Landon went to the justice of the peace Samuel Storie to make a formal complaint. The complaint  is in the collections of the Delaware County Historical Association. 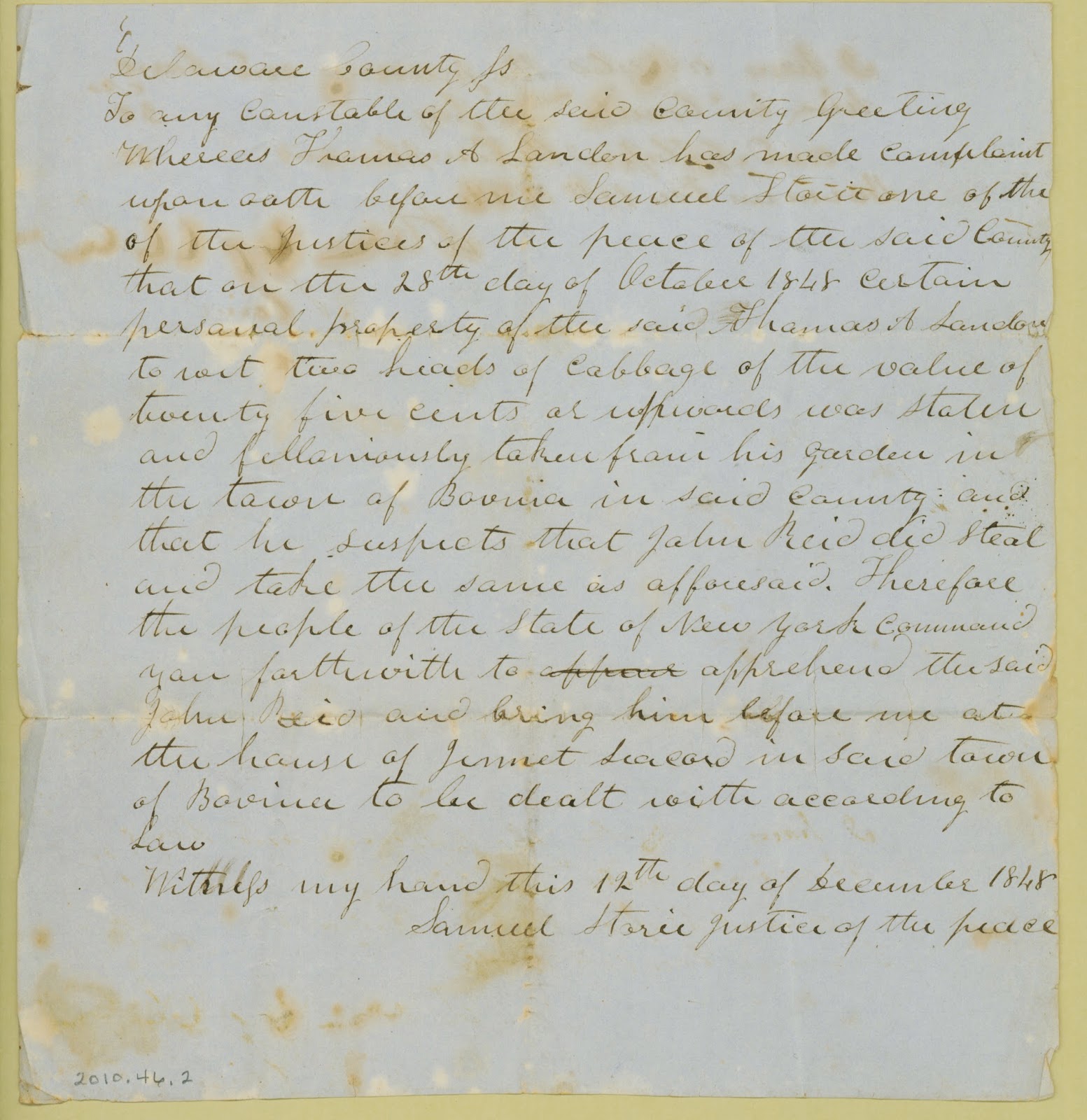 Here's a transcription of the document:

To any constable of the said county Greeting.

Whereas Thomas A. Landon has made complaint upon oath before me Samuel Storie one of the justices of the peace of the said county that on the 28th day of October 1848 certain personal property of the said Thomas A. Landon to wit two heads of cabbage of the value of twenty five cents or upwards was stolen and fellaniously taken from his garden in the town of Bovina in said county; and that he suspects that John Reid did steal and take the same as aforesaid. Therefore the people of the State of New York command you forthwith to apprehend the said John Reid and bring him before me at the house of Jennet Seacord in said town of Bovina to be dealt with according to Law.

John Reid was born in 1798 in Scotland and probably came to Bovina in the 1830s or early 1840s. This incident was not the only time Reid showed up Bovina records. In 1843, he had sued David W. Thomson for non-payment of a coat. The resolution of this case is not known. All that is available is the testimony of a number of people concerning his dealings with others. Basically, some were happy with his work and his charges while others thought he charged too much. Later in 1843, Reid got a license to keep a tavern in his house.

About a year after getting the license John Halstead accused Reid of assaulting him. He claimed that while at Reid's house he struck him and pushed him into Bill Forman. Unfortunately, the file for this case is incomplete, so we do not know the resolution of this case either.

It is not clear when Landon came to Bovina nor how he was related to the Thomas Landon who was instrumental in the creation of the town of Bovina. Thomas the shoemaker came probably in the 1840s and left around 1855, moving to California. He died in Sacramento in 1861 when he was only 44. Reid also left Bovina in the 1850s, but did not travel far, settling in Delhi. He died in 1884 when he was 85.
Posted by Bovina Historian at 8:00 AM