The Scottish Borders and the Connection to Bovina

As I write this, I am staying in the town of Hawick in the Scottish Borders.  My interest in the town and the area is that it is from where my Miller ancestors came – this is my fifth visit to the borders region.  So it seems appropriate to put some information into the Bovina NY History blog about the Scottish borders while I am visiting there.  This entry is a slightly edited version of what recently appeared in the Bovina U.P. Church newsletter, so it will look familiar to some of you.

Many of the earlier settlers in what became the Town of Bovina came from the area of Scotland known as “The Borders.” Bovina families with such surnames as Ormiston, Johnston, Miller, Elliott, Thomson, Armstrong, Graham, Coulter, Crosier, Scott, Irvine, Jardine, Murray, Turnbull and Hilson all had origins in the Scottish Borders. People from this area of Scotland have had a major influence in the United States. George MacDonald Fraser noted this influence in the introduction to his book, The Steel Bonnets: The Story of the Anglo-Scottish Border Reivers, with a reference to the 1969 Presidential Inauguration and the fact that three prominent border families, Johnson, Nixon and Graham (the last reference being to Rev. Billy Graham). I recommend reading Fraser’s book. It’s a long read, but really helps understand the development of the character of families from that region.

Given that the borders region was a popular route for invading armies from England and Scotland, the area was restless for hundreds of years, torn by a vicious cycle of raids, reprisals and blood feuds. The people who survived all of this had to be ruthless and resourceful. Prominent in the story of the borders are the Border Reivers – essentially guerrilla soldiers and professional cattle thieves. This was a region in which clan loyalty could trump loyalty to your nation. Peace of a sort only came with the union of the English and Scottish crowns in 1603 when James VI of Scotland became James I of England. He came down hard on the reivers – deporting a number of them and changing the administration of the region to ultimately blunt their power. Peace came to the borders, but at a price.

Many of Bovina’s Scottish families came in the late 18th and early 19th centuries – about 200 years after the end of the reivers. Many of these immigrants came from or near Hawick, a mill town in Roxburghshire noted for various kinds of knitwear. Francis Coulter, for whom Coulter Brook was named, came to the United States around 1800 (though Francis’s last name in Scotland was not Coulter but Coltherd – it changed after he came to Bovina). David and William Miller, sons of Thomas Miller came to the United States separately, David in 1815, William in 1830. Thomas was the beadle of the Roberton church, just a few miles from Hawick. The Ormistons came from nearby Wilton and were one of the more prominent Scottish borders families. John Hilson, one of Bovina’s somewhat later arrivals, came directly from Hawick in the 1850s. Gilbert Jardine also was a native of Hawick.

One of the reasons I am making this journey is to explore a fund raising trip for the Bovina U.P. Church to the Scottish borders in the late fall of 2014. The trip will be coordinated through a company called Celtic Tours, based in Albany. I have done a dozen trips through Celtic since 2006. My good friend Noreen Yost has led these trips and will be leading this one. Her trips are very popular. When you meet her, you’ll understand why. Each trip I have done with her raises money for a local church, library or museum. For each person going on the trip, $50 will be donated to the Bovina United Presbyterian Church.

Pricing details for this trip will not be worked out until January, the biggest challenge being the airfare (fuel surcharges and taxes are often more than the ticket price itself and have recently gone up substantially). The trip will be seven days/six nights and will include three nights in the Scottish Borders and three nights in Edinburgh. The Scottish Borders do not receive the tourist traffic that Edinburgh and the Scottish Highlands do, but the region has much to offer. Residents from around the Catskills will be struck by the resemblance of the terrain to their home mountains.

One of the events being considered specifically for those interested in family history will be some kind of ‘meet and greet’ event with members of the Borders Family History Society. Beyond that a number of sites are being considered for the itinerary, starting with the four magnificent ruined abbeys at Melrose, Dryburgh, Jedburgh, and Kelso. These abbeys date from the 12th century and are striking reminders of the turbulence that the borders experienced over 500 years. They were destroyed and rebuilt several times before their final destruction in the 16th century, caused partly by the reformation and partly by Henry VIII’s invasion in the 1540s, known as the ‘rough wooing.’ Another attraction is Abbottsford, the home of Scottish author Sir Walter Scott (in Bovina’s early days, every school library had at least one of his books on its shelves). Abbottsford just underwent a major renovation and will be well worth a visit – and Scott himself is buried at Dryburgh Abbey. Another possible site is Traquair House, the oldest continuously occupied house in Scotland, dating from 1107. Also being considered for the day we travel to Edinburgh is a stop at the Rosslyn Chapel, made famous in the DaVinci Code. In Edinburgh, there will be plenty to see – Edinburgh Castle, the Royal Mile, the Palace of Holyrood (famous for its association with Mary Queen of Scots) and Arthur’s Seat, the extinct volcano that overlooks Scotland’s capital. Or you can take advantage of some of the research opportunities there, including the National Records of Scotland, which is the recently merged General Records Office of Scotland and the National Archives of Scotland. For the days we are not traveling to and from the airport or to Edinburgh, you can join the group or go off and do your own thing. One other option under consideration will allow you at the end of this trip to exercise the option to visit Northern Ireland (from where Moses Burns, the ancestor of the Burns and other Bovina families, came).

So stay tuned for further developments. If you are seriously interested in this trip, please let me know at bovinahistorian@gmail.com or at 607-832-4609.

And today I am off with Marjorie Gavin, who lives here in Hawick, to check out a couple of things related to the planned trip next year.  Marjorie and I think we are distantly related through the Laidlaws and Grieves, but we’re still working to prove that.

And here's a picture I took on the 23rd on my way to Hawick. This is the main square in Selkirk - the statue is to Sir Walter Scott - highly revered in the borders. 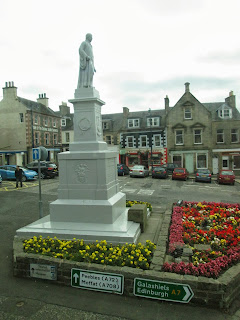 Posted by Bovina Historian at 4:07 AM