One hundred years ago this month, on January 15, 1913, Swiss native, Alouisa Martha Marti Müller died at her home in Bovina.  Born in July 1829 in Schmerikon, Switzerland, she was married to Jost Urban Müller in 1854 in the same community.  They appear to have stayed in Schmerikon when they started their family, probably right up to the time they emigrated.

The Müller family came to the United States in the summer of 1870, arriving in New York City.  They did not linger long in the city but headed north to Bovina.  Why they chose Bovina we do not know, but they would stay there the rest of their lives. They purchased a home from Thomas Dennis in 1875.  The house was almost across from where Hugh and Pat Lee live (the house's last owner was Vera Hunter - it was demolished in the late 1990s - see photograph below, taken around 1990).  Urban Müller was a painter, though whether a house painter or an artist is not clear.  At the time of their arrival, the Müllers had four children, Louise, Werner, Emma, and Adolph.  Alouisa would have at least three more children in Bovina, Frederica, Kate and Jennie.  Alouisa and Urban were the parents of fifteen children in all, but eight of them died before Urban's death in 1897.  Likely some, if not all, of the eight died while the family was still in Switzerland.  When Urban died, his fairly brief obituary in the Delaware Republican noted that he was "a genial good citizen."

A decade after her husband’s death, Alouisa lost a ninth child with the death of her son Adolph in Texas.  In the 1910 census, Alouisa and her daughter, Frederica were living in the family house in Bovina, taking in laundry.  Three years later, Mrs. Müller died of pneumonia at the age of 83.  At her death, she was survived by six of her children.  Two of them were out west, Werner in Iowa and Emma (Roper) in Kansas.  Louise was in New York City, where she was a housekeeper in a hotel there.  Three of her daughters lived locally.  Jennie was Mrs. Otis McCumber and living in Andes.  Two other daughters were living with their mother at her death, Frederica and Kate.

Freda and Kate stayed in Bovina after Alouisa's death.  Their sister Louise joined them about a year later.  Louise had been a housekeeper for many years, starting with Reverend J.B. Lee in Bovina, then later for Judge Murray in Delhi.  After sixteen years working as a housekeeper in two New York City hotels, she developed health problems and had to retire.  Her last years in Bovina were spent mostly bedridden, cared for by her sisters until her death in 1917.  Their brother, Werner Müller moved to Iowa in the 1880s and probably lived in Des Moines up to his death, going by the name of Warner Miller.  He was still alive in the 1940 census, living with his daughter.  His sister Emma Müller was married to Samuel Roper in 1881 and settled in Kansas.  She was widowed before 1920 and still alive in 1940, living with one of her daughters.  Freda and Kate Müller continued to live in Bovina into the 1930s, occasionally going to Andes to help their sister Jennie run her boarding house.  Sometime in the 1940s both sisters moved permanently to Andes, renting out their Bovina house.  They sold it to Bill and Vera Storie in 1944.  Kate died in 1947 and Frederica in 1951.  Their older sister Jennie, the first child born to Urban and Aloisa in America, survived until 1961, dying a few months shy of her 90th birthday.  Urban and Aloisa are buried in Bovina, as are Louise, Kate, and Federica. 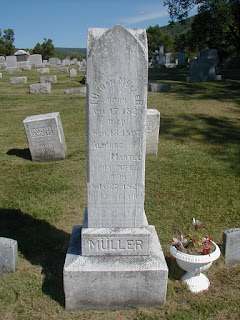