UPDATE - October 17, 2013 - A suspicion that I had for some time was confirmed this August when I verified that James A. Thomson was not the artist of these two paintings.  The fact that he never pursued a career as an artist was a strong clue.  Another was that nothing was mentioned in his obituary.  The final kicker was finding an old label on top of one of the paintings with the name Jack Elliott.  Mea culpa.

The Thomson connection comes from the fact that the painting of Johnson's Mill was done for James' parents, Andrew and Anna Thomson.  He inherited the painting and passed it on down to his daughter Ina, who bequeathed it to the Bovina Historical Society.

Unfortunately, the information on Jack is rather sparse.  He was born in May 1850 and came to the United States from Scotland in the 1880s.  It does not appear that he is related to the Elliotts who settled in this area earlier in the century.  Jack settled in Bloomville and it was there that he died in September 1914 of heart failure.  The Andes Recorder reported his death in a brief notice: "Jack Elliott, a painter, died at Bloomville, September 6, from heart failure.  He was a native of Scotland; a man of middle age.  On coming to this country he spent some time in Bovina and painted numerous landscape pictures and portraits, and was a good artist."

We have identified two other paintings of his, one now owned by Pat Miele, the other held by the Delaware County Historical Association.  Since he painted 'numerous' pictures and portraits, I would love to find more of these. I have some feelers out but other thoughts are welcome. 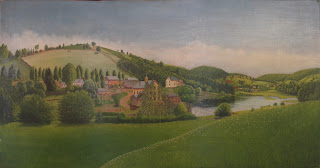 Posted by Bovina Historian at 7:51 AM