One hundred years ago this month, Mary Campbell and Ellison (Elsie) Oliver passed away.  Mary died on July 26, 1912, Elsie four days later.  Except for their having died the same month, there is little to connect these women.

Mary C. Campbell was born May 20, 1859, the daughter of Duncan Campbell and Nancy Thomson.  She spent her whole life in Bovina and most of that on the family farm on New Road.  Sometime in the 1890s, Duncan, Nancy and their daughter may have moved into a house in the hamlet, leaving the farm to their son John.  After the death of her father in 1898, Mary continued to live with her mother.  Mary became ill in late 1909 or early 1910 with what turned out to be cancer.  Her mother died in May of that year, with Nancy following her to the grave about 10 weeks later. 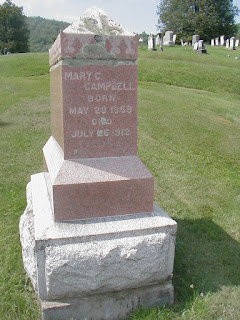 Ellison Oliver was born May 11, 1825, the daughter of John Armstrong and Isabella Coulter.  She married David Oliver (1820-1903) in 1845 in Bovina.  They had four children, John, William, Mary and David.  David and Elsie lived in Andes early in their marriage but by 1870 they were living in Bovina on a farm on Bramley Mountain.  David died in November 1903 after a short illness.  After the death of her husband Elsie moved to Hamden to live with her son William.   She died in Delancey and was buried in Bovina next to her husband. 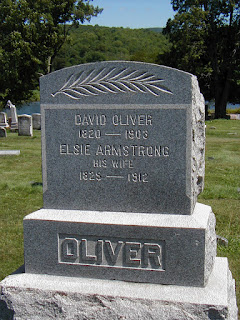 And 150 years ago this month, Elizabeth Downie died at the age of 45, after having lived most of her life in Scotland. Elizabeth was born there in 1817, the daughter of William Thomson and Catherine McKay.  She spent 41 years of her 45 years in the land of her birth.  She married John Downie and was the mother of at least five children, all of whom were born in Scotland.  When John and Elizabeth emigrated to the United States, they came with two children, son Thomas (b 1841) and daughter Elizabeth (b. 1853).  At least one child, a daughter Catherine, had died in Scotland in 1854.  The other two children may also have died in Scotland before their parents emigrated.  John and Elizabeth and their children arrived in New York City in June of 1858.  Their ultimate destination was Ohio, but by 1860, they had only made it as far as Bovina, where John set up business as a shoemaker in what is now the Ken Brown residence.  Elizabeth Thomson Downie died on July 6, 1862 after barely four years in the US. 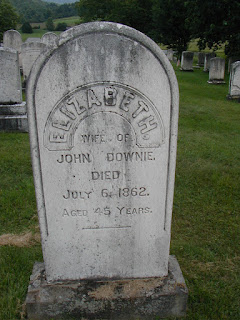 After Elizabeth’s death in 1862, her husband remained a widower until 1868 when he married Mary Ann Scott.  They had one child, a son James, born in Bovina.  By 1880, they were living in Iowa.  John died in Norfolk, Virginia in 1889.  Mary Ann survived him a bit over a decade, dying in Oneonta in 1900.  Both of them are buried in Bovina next to John’s first wife.

[NOTE:  Alan Downie, a descendant of John's second marriage, has family information that indicates that John and his family came to the US in 1854, not 1858.  We hope to get this clarified some day.]
Posted by Bovina Historian at 8:00 AM