It's been 200 years since the start of the War of 1812 between the United States and Great Britain.  How did this war impact Bovina?  That's harder to determine than with the US Civil War.  The town of Bovina did not even exist during the war, though the area that is now Bovina was being rapidly settled.  There are no records related to what happened in the area during the war, but we can talk a bit about three men with Bovina connections who did serve in the war - specifically three men who are buried in the Bovina cemetery - Truman White, James Hoy and Close Light.

Close Light is a name that always fascinated me when I saw it in the cemetery as a child.  I wondered if it was native American, but his origins appear to be European.  Born around 1792, he lived in the Lake Delaware area, very near the Bovina town line.  He was married to Melinda Simmons in 1813 and had several children.

Light served as a private in a company commanded by Alexander McPherson in a Col. Putnam Farrington's regiment of militia.  Enlisting in September 1814, he served for three months.  He was paid $24.77 for his service, which ended December 10, 1814.  The Treaty of Ghent which ended the war was signed in late December 1814 but word did not get to the United States until February 1815.

The State of New York passed a series of laws starting in 1857 to address lack of payment for expenses to war veterans that had originally been ordered in 1818 and 1819. Many veterans of the War of 1812 filed claims under these acts.   Light filed his claim for expenses on June 29, 1857.   He claimed that he was owed $73, itemized as follows:

Light's claim was paid on September 26, 1860 for $56.  It is not clear what expenses for which he claimed reimbursement were withheld. Close Light died in December of 1864.

Truman White's Bovina connection may only be that he is buried here.  Born around 1792, he was living in the Town of Middletown in the 1820s and 30s.  By 1840, he was in Andes and by the 1850 census, he was in Meredith.  In 1856, White lost his Meredith farm due to foreclosure.  He appears to have moved to New Milford, Pennsylvania, possibly to live with or near one of his children.  It is not clear when and where he died, but I've speculated that he may have been visiting his daughter, Hannah White Rutherford, who lived in Bovina, and died during the visit.  It probably was easier to bury him near where he died instead of shipping the body back to Pennsylvania.  I was unable to locate any records specific to White's service in the war.  He did not file a claim for expenses as did Bovina's other two War of 1812 veterans, though it might be because he died before the 1857 law was passed allowing these claims.

The third War of 1812 veteran buried in Bovina is James Hoy.  He was born in 1791 in Washington County but lived much of his life in Bovina (his farm was where Jack and June Burns farm).  His service in the war appears to have been very short, though it is possible that this claim was for only one part of his service.  Some family information indicates that he saw additional service and was a lieutenant.  The service for which he claimed payment many years later came in the 1814.  He enlisted in Plattsburgh the first of September 1814 in the 114th Regiment of New York Militia under the company commanded by Henry Price.  He was discharged on September 18, after participating in a march to Burlington, Vermont.  His service was said to include the time needed to return home.  For that service, he supposedly received 160 acres of land, but did not receive the money promised under laws passed in 1818 and 1819.  Hoy filed a claim in December 1859 for $64, itemized as follows:

Hoy was only allowed $17 of his claim and, apparently, the state was lax in paying that.  Hoy filed a further claim on June 11, 1869, requesting his payment.  He died only two days later on June 13.  After his death, his lawyers contacted the state and requested payment of the $17 to his estate.  Hoy's estate was probated in Delaware County. From a review of the probate file, I could find no evidence that the payment that Hoy was still seeking just two days before his death was ever made.  One of his sons, also named James, wrote to J.S. McNaught in May 1873 asking if his father was ever paid the money.  Apparently, he had a warrant in hand but wanted to know if it was genuine.  He noted that "this country is full of counterfeit and bogus articles of that kind."  No response to this letter was in the file. 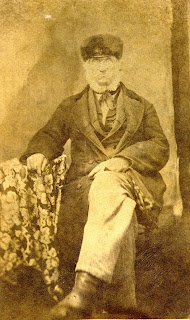 Unlike Truman White and Close Light, we actually have a photograph of James Hoy, thanks to his great great grandson, David F. Hoy III.  It is believed that he is wearing his uniform from the war.

Posted by Bovina Historian at 10:00 AM