Bovina has had some kind of fire department at least since 1915, when the Bovina Center Fire Department was created.  In 1949, the Bovina Fire District came into being and shortly after that, the Bovina Fire Department as we now know it was formed.  I will be doing future blog entries about the early department and the current one, but I'm doing this entry specifically to highlight an exhibit at the Delaware County Historical Association, which formally opens this Friday (February 17) from 4 - 6. The Weird, The Odd and The Wonderful: Historic Objects and Curios from the Museum highlights a number of items from the DCHA collections.  In the exhibit is an item close to me - my dad's fireman's uniform.  The uniform dates from 1963 and was purchased through Stewart's Department Store in Delhi. 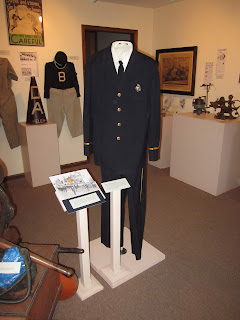 I suspect the entire department got these uniforms around the same time.  And they got public exposure that same year.  On July 6, 1963, the Bovina Fire Department participated in a parade at the Delaware County Firemen's Convention parade in Sidney.  This photograph was published in the Oneonta Star on July 8. 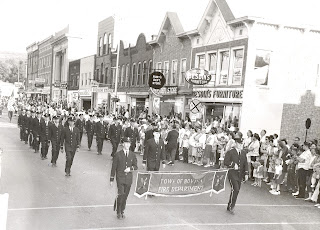 The men carrying the banner are Carl Schneider and Jack Burns.  The man behind the banner is Fire Chief Floyd Aitkens.  The left row of marchers are [unknown], Bob Burns, Ernie Russell, [unknown], John Robson, Herb Parsons (maybe) and [unknown].  The right row are Lester Stewart (partially hidden by Floyd Aitkens), Charlie LaFever (my dad), Cliff Hall, Bob Hall, Ronnie Russell, Roy 'Doc' Hadley and Jack Damgaard.  Any additions or corrections most welcome.  I especially want help on the ones I marked [unknown].  Click on the image to get a larger version.

So come to DCHA on Friday from 4-6 for a wine and cheese reception opening this exhibit.  Items on display, as well as my dad's uniform, will include: a 1950s Electro cardiogram, a stuffed albino woodchuck, a sheriff's billy club, a 1880s jeweler's lathe, a coffin, and a 1755 fire pump. The exhibit will be open during DCHA's regular hours until May 11th. Admission is free.
Posted by Bovina Historian at 8:07 PM