This will be the first in a series of monthly blog entries about people buried in Bovina cemeteries.  This started from a presentation I did on October 29 called "I See Dead People-Stories from Bovina Cemeteries."  The initial entries will be from that presentation, but there are many stories in Bovina's cemeteries.  There are over 2500 people buried in Bovina.  I can’t tell all the stories, but I’ll keep working on them.

Over the span of 13 days in the early fall of 1865, the life of Nancy Bailey Cathels was completely upended.  Her life already had had challenges.  She lost an infant daughter in June 1854 and a 12 year old daughter in 1862.  And from reading the Bovina UP Church session records, it’s obvious that her life with her husband James was not without its bumps.  The events of September and early October 1865, however, had to be the greatest challenge in her life.

Nancy was born in 1825, the daughter of William and Mary Bailey.  Her husband James, the son of James and Isabella Dickson Cathells, was born in Scotland in 1819.  James and Nancy lived on Scutt Mountain Road, about a quarter of a mile or so off Pink Street.

In the early 1860s, James shows up three times in the Bovina UP Church Session minutes.  Each time, he was in some kind of trouble.  In the fall of 1861, he was sued for slander by James Campbell.  The Bovina UP Church session stepped in to arbitrate and after a few months, it was resolved, with Mr. Cathels withdrawing the statement against Mr. Campbell.  Cathels said that he "did not intend to slander or injure him by said statements."  The nature of the slanderous statement was not revealed.

In the fall of October 1862, James again was involved in a case of slander, but this time it also included some fists and liquor, and was related to the Civil War.  James Cathels had claimed service exemption in July 1862 because of the after effects of fracturing his arm two years earlier.  The following month, Alexander Hanford Gill (commonly known as Hanford), son of James Gill, enlisted in the 144th New York Infantry.  On October 6, while at Hamilton’s tavern (where the Jardine’s house is now located), Cathels made some remarks concerning the validity of someone's enlistment papers.  What happened next is not clear, given the differing testimony.  James Gill stated that Cathels specifically claimed that Hanford had forged or back-dated his enlistment papers in order to collect the bounty.  Cathels claimed that he had made a statement that someone had “done a dishonorable act” in enlisting, without saying whether or not he had said who that was.  Whatever was said or how the statement was made, a fight ensued.  Gill claimed that Cathels proceeded to hit him seven or eight times.  He also claimed that Cathels “took up a chair and swore he would split my head.”   Cathels claimed that Gill took him “by the throat” and that he struck back in self defense.  It wasn’t until April 1863 that the case was settled with Mr. Cathels receiving an official rebuke and being restored to membership in the congregation.  [Note:  Alexander Hanford Gill served in the 144th from the time of his enlistment until the end of the war.  There is no evidence that his right to a bounty payment was ever questioned by anyone other than Cathels.]

A year later, Cathels once again found himself before the Bovina UP Church session.  This time, he was in trouble for having signed a license for the sale of liquor.  James fully admitted having done so and in the knowledge of the rules of the church against the sale of liquor.  His membership was suspended.  It is not clear at the time of his death whether or not he had been restored to membership.

In the spring of 1865, James and Nancy Cathels reported to the state census taker that they had eight children, ranging from their eldest son, David, age nineteen, to their youngest son and child, James, age about one and a half.  It was in the early fall of that year that Nancy Bailey Cathels’ world began to unravel.  On September 27, her husband James died.  Within two days of being widowed, Nancy lost her two youngest sons, John Steel, age three and James, who was almost two (though the newspaper indicates that John Steele Cathels died the same day as his father).  Four days later, her youngest daughter Jane died, age five.  Jane was followed in death by her eight year old sister Maggie on October 7.  And three days later, Nancy’s mother, Mary Bailey, died, age 65.  So Nancy’s life was totally changed in just two weeks. These deaths were reported in the local newspapers (except, for some reason, Maggie's).  These are two clips from the Bloomville Mirror, which reported these deaths with no other information.  We cannot determine what took Nancy's husband and children.  Given this unusually large number of deaths in one family, it likely was the same disease.  Any number of illnesses is possible - diphtheria is one strong candidate.

Nancy had little time to mourn.  If a contagious disease is what took her family, some of the other children may have gotten the same illness but managed to survive.  She also may have caught the illness - we just do not know.  Nancy may have started out her widowhood by nursing some or all of her four remaining children, David, Mary, Hanna and William.  It is possible by this time, however, that oldest son David had left Bovina.  When Nancy filed her petition to become administrator of her late  husband’s estate in February 1866, David was living in Patch Grove, Wisconsin.  Whether David left before or after his father's death is not known.

And during this tragic and challenging time in her life, Nancy had another complication.  She was pregnant.   In May 1866, she gave birth to a son, James John Steele Cathels.  Nancy continued farming at least into the 1880s, raising her surviving children.  In 1880 she was still farming with her son James, now 14 and a hired laborer.

It appears likely that Nancy lost another child before her death.  Her son William disappears from the records after the 1870 census and was not listed when her will was filed (even if not named in a will, estate files usually list all surviving children).  He probably died before 1875, though if buried in Bovina, the grave is not marked.  Nancy survived her husband and the children who died just after him by over 20 years, dying in July of 1888 at the age 63 of Brights disease.

She was survived by her sons David, living in Murray, Iowa, and James J.S., living in Bovina.  Her daughters had married and settled in South Dakota.  Mary B. Hyzer was in Madison, while Hannah Betts was in Franklin.  In her will, written about a month before her death, Nancy bequeathed a number of things to her children, including a "feather bed, pillows, bolster and a full supply of sheets, blankets and quilts to make a good comfortable bed" to her son James.  Her clothing went to her daughters.  Mary also received a yarn carpet that had belonged to Nancy's mother.  David was appointed the executor of the estate.  James, the remaining child in Bovina at his mother's death, left Bovina and by 1900 also was living in Murray, Iowa.

The only reminder in Bovina of the Cathels family is the obelisk in the Bovina Cemetery erected shortly after the tragedy of the fall of 1865 at a cost of $100.  The cemetery monument spells the name as Cathells while all of the records use Cathels, including at least two documents signed by James Cathels. 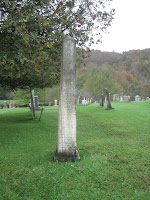 Posted by Bovina Historian at 8:30 AM