Some odds and ends to pass along, starting with a reminder of some upcoming activities this summer in Bovina:

July 17 is Bovina Day, with a Community wide yard sale, a baseball game with the Bovina Dairymen taking on Roxbury at noon, a historic display on last year's Bicentennial at the UP church, a book and glassware sale at the Bovina Library, and so much more. And don't forget the evening before, July 16th, will be another installment in the Bovina Melodrama, with shows at 7 and 8 at the Community Hall, proceeds to support the Bovina Public Library.

The second annual Bovina Farm Day will be held September 5 up Crescent Valley road. Stay tuned for further details as the summer progresses.

And a couple of updates from previous blog entries:

On May 23, I reported on when and how Bovina became a 'dry' town and had it figured out that it happened in 1883. In reviewing some old newspapers that I discovered on the web, I found that Bovina voted to go dry in February 1881. The brief article, taken from the Poughkeepsie Daily Eagle for February 15, 1881:

In my June 9 blog entry "Bridging Bovina," I reported that the bridge at the lower end of the hamlet had a traffic light because repairs were to take place to the bridge. Well, the light is no longer there, so I'm not sure what was being done to the bridge.

I attempted to recreate the pictures I posted in that entry to show how the bridge looked today compared to when it was completed 55 years ago, but there was too much 'vegetation' to allow for a good shot. I will close this entry with two shots I did get, one of the bridge looking toward the hamlet (and the closest I could get to recreating the photo of the bridge in 1955), the other of a chunk of concrete that I believe was part of the demolished old bridge. Click on the images to see a larger view. 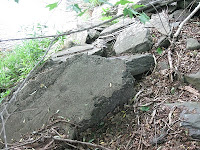 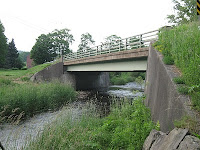 Posted by Bovina Historian at 9:03 PM