On January 1, 1949, Fred Thomson, somewhat unwillingly, retired as Bovina's postmaster when he reached the mandatory retirement age of 70. The news clipping below came from the scrapbook of Helena Hilson and dates from early 1949. It is not clear from which newspaper, though probably either the Delaware Republican Express or the Oneonta Daily Star.

The post card below shows the Thomson residence when it was the post office. This is now the residence of Chuck and Betty McIntosh. 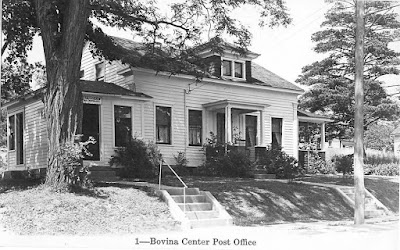